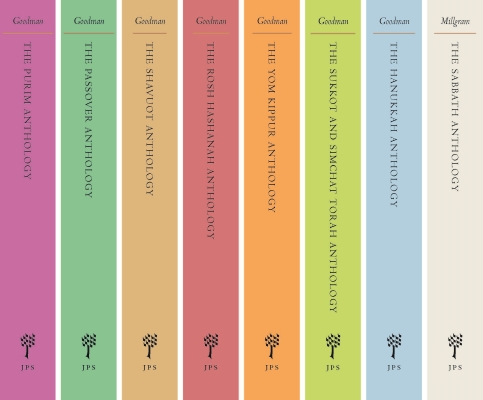 
Available in Warehouse. Wait for Email Confirmation for ETA
Back in print by popular demand, the classic JPS holiday anthologies are unequaled compilations of Bible, Talmud, prayer, poetry, and folklore. Even in our digital age, they deserve a place on the bookshelf of rabbis, cantors, educators, and any reader seeking the meaning and origin of the Sabbath and Jewish festivals. The volumes mine Bible, Talmud, midrashim, and a rich variety of other sources, including works by prominent authors.

The Purim Anthology relates how the first Purim originated, explains the laws and rites, describes its colorful celebration in different eras in commemoration of local deliverances, and presents a reservoir of contemporary articles, stories, and poems— exploring the holiday’s multifaceted art, music, plays, and humor.

The Passover Anthology describes the Jewish experience of Passover throughout the lands and ages —the story, celebrations in the home and community, laws and prayers, seder plates and songs, art and dances, prayers and games; and showcases modern writings by Winston Churchill, Heinrich Heine, Hayim Nahman Bialik, and others.

Philip Goodman (1911–2006) was a rabbi and served as director of the Jewish education and Jewish center division for the Jewish Welfare Board, executive secretary of the Jewish Book Council and executive secretary of the American Jewish Historical Society. Goodman is the author or editor of many books, including seven volumes in the JPS Holiday Anthology series.
Rabbi Abraham E. Millgram (1901–98) held a number of rabbinic posts and served as director of the B’nai B’rith Hillel Foundation at the University of Minnesota. He was the education director of the United Synagogue Commission on Jewish Education and is the author of several books, including Jewish Worship (JPS, 1971).

“Throughout my long career as a rabbi, the JPS holiday anthologies have been an essential resource. All the core background is in one place. If I need a holiday story, the anthologies contain a wide range of choices. And sections on celebrations worldwide provide new approaches to festivals.”—Rabbi Steven Bob, author of Jonah and the Meaning of Our Lives


“This reissue is good news! I read this rich, varied, and classic series with pleasure and collected the volumes avidly when they first appeared.”—Rabbi Reuven Hammer, author of Akiva: Life, Legend, Legacy