Wealth and Justice: The Morality of Democratic Capitalism (Values and Capitalism) (Paperback) 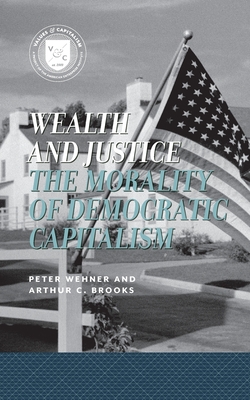 Wealth and Justice: The Morality of Democratic Capitalism (Values and Capitalism) (Paperback)


Available in Warehouse. Wait for Email Confirmation for ETA
Popular opinion would have us believe that America's free market system is driven by greed and materialism, resulting in gross inequalities of wealth, destruction of the environment, and other social ills. Even proponents of capitalism often refer to the free market as simply a 'lesser evil' whose faults are preferable to those of social democracy or communism. But what if the conventional understanding of capitalism as corrupt and unprincipled is wrong? What if the free market economy actually reinforces Christian values? In Wealth and Justice: The Morality of Democratic Capitalism, Arthur C. Brooks and Peter Wehner explore how America's system of democratic capitalism both depends upon and cultivates an intricate social web of families, churches, and communities. Far from oppressing and depriving individuals, the free market system uniquely enables Americans to exercise vocation and experience the dignity of self-sufficiency, all while contributing to the common good. The fruits of this system include the alleviation of poverty, better health, and greater access to education than at any other time in human history-but also a more significant prosperity: the flourishing of the human soul.
Arthur C. Brooks is the president of the American Enterprise Institute. His previous books include Gross National Happiness: Why Happiness Matters for America-and How We Can Get More of It and Who Really Cares: The Surprising Truth about Compassionate Conservatism. Peter Wehner is a senior fellow at the Ethics and Public Policy Center. He is the former Director of the White House Office of Strategic Initiatives and served as deputy director of speechwriting under President George W. Bush.