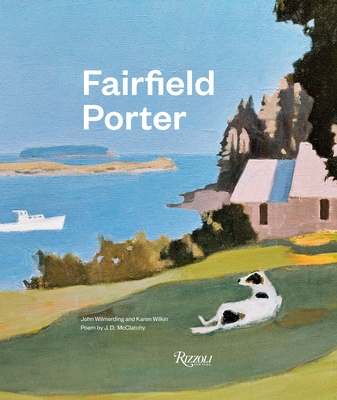 
Available in Warehouse. Wait for Email Confirmation for ETA
The first comprehensive survey of the beloved figurative realist painter Fairfield Porter to be published in more than two decades. A figurative realist in the heyday of abstract expressionism, Fairfield Porter (1907–1975) painted himself, his family, and friends in New York City, in Southampton, Long Island, and on an island off the Maine coast, all depicting a relaxed and comfortable world that seemed to mirror his own affluent, well-connected existence. With virtually all of the artist’s previous publications now out of print, this much-anticipated volume is an important addition to the literature on this great American master. Porter graduated from Harvard in 1928 and then studied at the Art Students League in New York with Thomas Hart Benton. Along with months in Maine, Porter lived in New York and from 1948 on, in Southampton where he purchased a large, late Federal-style house for his own expanding family. Porter painted several artist friends, including Elaine de Kooning, Larry Rivers, and Jane Freilicher. He was also close to the modern poets John Ashbery, Frank O’Hara, and James Schuyler. With a carefully curated selection of the artist’s best works, John Wilmerding, a specialist in American art, gives full consideration to Porter’s expressive compositions and a color palette influenced by his coastal surroundings. Karen Wilkin discusses Porter’s influences and pictorial creativity. Distinguished poet J. D. McClatchy writes a reflection on one of Porter’s paintings.
John Wilmerding is Sarofim Professor of American Art, emeritus, at Princeton University.

Karen Wilkin is an independent curator and art critic based in New York. She is a contributor to Rizzoli’s Wayne Thiebaud (2015).

J. D. McClatchy is the editor of the Yale Review and former president of the American Academy of Arts and Letters.
The Season's Outstanding Art Books "By turns awkward and graceful, these images dodge nostalgia but not the aching pleasure found in, among other things, the clotted light of a bunch of buttercups."
—ArtForum

"The comprehensive book is special because it includes many color reproductions of paintings otherwise seen only in black-and-white (and small) in the artist’s catalogue raisonné from 2001."
—HyperAllergic.com

"The spare elegance of the realist Fairfield Porter (1907-1975) never gets old. A monograph on the artist and his work, recently published by Rizzoli, provides an intense exploration of the intriguing and complex life of this important painter."
—Art of the Times