Black Refractions: Highlights from The Studio Museum in Harlem (Hardcover) 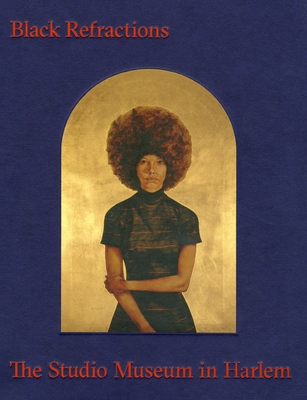 Black Refractions: Highlights from The Studio Museum in Harlem (Hardcover)


Available in Warehouse. Wait for Email Confirmation for ETA
An authoritative guide to one of the world's most important collections of African-American art, with works by artists from Romare Bearden to Kehinde Wiley.

The artists featured in Black Refractions, including Kerry James Marshall, Faith Ringgold, Nari Ward, Norman Lewis, Wangechi Mutu, and Lorna Simpson, are drawn from the renowned collection of the Studio Museum in Harlem. Through exhibitions, public programs, artist residencies, and bold acquisitions, this pioneering institution has served as a nexus for artists of African descent locally, nationally, and internationally since its founding in 1968. Rather than aim to construct a single history of "black art," Black Refractions emphasizes a plurality of narratives and approaches, traced through 125 works in all media from the 1930s to the present.

An essay by Connie Choi and entries by Eliza A. Butler, Akili Tommasino, Taylor Aldridge, Larry Ossei Mensah, Daniela Fifi , and other luminaries contextualize the works and provide detailed commentary. A dialogue between Thelma Golden, Connie Choi, and Kellie Jones draws out themes and challenges in collecting and exhibiting modern and contemporary art by artists of African descent. More than a document of a particular institution's trailblazing path, or catalytic role in the development of American appreciation for art of the African diaspora, this volume is a compendium of a vital art tradition.
Connie H. Choi is the Associate Curator of the Permanent Collection at The Studio Museum in Harlem. Previously, she was Assistant Curator of American Art at the Brooklyn Museum.
Thelma Golden has become a driving force in the art world. Since disrupting the status quo with her 1994 exhibition, Black Male: Representations of Masculinity in Contemporary American Art, Golden has continued to create challenging dialogues around art and artists, making her one of the most respected curators in America. Golden took up a new challenge in 2000, joining the Studio Museum in Harlem and becoming executive director and chief curator in 2005.
Kellie Jones Dr. Kellie Jones is Associate Professor in Art History and Archaeology and the Institute for Research in African American Studies (IRAAS) at Columbia University. Dr. Jones has received numerous awards for her work and in 2016 she was named a MacArthur Foundation Fellow. She is the author of two books published by Duke University Press, EyeMinded: Living and Writing Contemporary Art and South of Pico: African American Artists in Los Angeles in the 1960s and 1970s (2017).

"Comprised of over one hundred works by nearly eighty artists across all media dating from the 1920s to the present, Black Refractions surverys close to a century of creative achievements by artists of African descent and is the first traveling exhibition in twenty-five years to reveal the breadth and expansive growth of the Studio Museum's permanent collection." — ARTFIXDAILY.com

"The richly illustrated volume includes essays by Connie H. Choi and Kellie Jones; entries by a range of writers, curators and scholars (among them Lauren Haynes, Ashley James, Oluremi C. Onabanjo, Larry Ossei-Mensah and Hallie Ringle) who contextualize the works and provide detailed commentary; and a conversation among Choi, Thelma Golden, and Jones that draws out themes and challenges in collecting and exhibiting modern and contemporary art by artists of African descent." —CHARLESTON CHRONICLE

"The touring exhibition Black Refractions is a comprehensive introduction into the broad repertoire of the collection at the Studio Museum of Harlem. From Malick Sidibe to Kerry James Marshall to the exquisite Barkley Hendrick’s Lawdy Mama featured on the book cover, the scale of the show is vast, yet not unwieldy. The accompanying book published by Rizzoli offers a notable dive into the museum’s history and status as one of the most exciting museums in today’s American artistic landscape." —TEETH MAGAZINE