The Interpretation of Dreams: The Psychology Classic (Capstone Classics) (Hardcover) 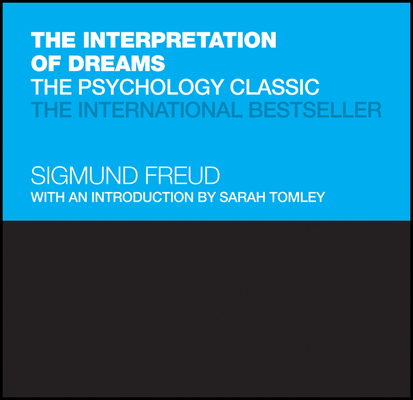 The Interpretation of Dreams: The Psychology Classic (Capstone Classics) (Hardcover)

Part of the bestselling Capstone Classics Series edited by Tom Butler-Bowdon, this collectible, hard-back edition of The Interpretation of Dreams provides an accessible and insightful edition of this important work of psychology

Sigmund Freud's The Interpretation of Dreams introduced his ground-breaking theory of the unconscious and explored how interpreting dreams can reveal the true nature of humanity. Regarded as Freud's most significant work, this classic text helped establish the discipline of psychology and is the foundational work in the field of psychoanalysis. Highly readable and engaging, the book both provides a semi-autobiographical look into Freud's personal life - his holidays in the Alps, spending time with his children, interacting with friends and colleagues - and delves into descriptions and analyses of the dreams themselves.

Freud begins with a review of literature on dreams written by a broad range of ancient and contemporary figures - concluding that science has learned little of the nature of dreams in the past several thousand years. Although the prevailing view was that dreams were merely responses to 'sensory excitation, ' Freud felt that the multifaceted dimensions of dreams could not be attributed solely to physical causes. By the time Freud began writing the book he had interpreted over a thousand dreams of people with psychoses and recognised the connection between the content of dreams and a person's mental health. Among his conclusions were that a person's dreams:

The Interpretation of Dreams: The Psychology Classic is as riveting today as it was over a century ago. Anyone with interest in the workings of the unconscious mind will find this book an invaluable source of original insights and foundational scientific concepts. This edition includes an insightful Introduction by Sarah Tomley, a psychology writer and practicing psychotherapist. Tomley considers paints a picture of Freud's life and times, reveals the place of The Interpretation of Dreams in the context of Freud's other writings, and draws out the key points of the work.

Sigmund Freud was born in 1856 and grew up in Vienna. At university he trained to be a doctor, but shifted his attention towards the human mind and the development of psychoanalysis. On his death in 1939, The New York Times lauded him as perhaps "the greatest single influence on the thought of the 20th century". Sarah Tomley is the author of What Would Freud Do? and senior editor of the award-winning The Psychology Book. She is an accredited psychotherapeutic counsellor and therapist working in private practice in Suffolk, UK. She has degrees in philosophy and psychotherapy, and is currently studying neuropsychoanalysis. Tom Butler-Bowdon is series editor for the Capstone Classics series. He has written Introductions for Capstone editions of Plato's The Republic, Machiavelli's The Prince, Adam Smith's The Wealth of Nations, Sun Tzu's The Art of War, Lao Tzu's Tao Te Ching, and Napoleon Hill's Think and Grow Rich. Tom is the author of the 50 Classics series and is a graduate of the London School of Economics and the University of Sydney.