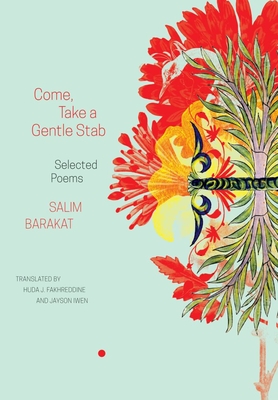 
Available in Warehouse. Wait for Email Confirmation for ETA
Introduces renowned Kurdish-Syrian writer Salim Barkat to an English audience for the first time, with translated selections from his most acclaimed works of poetry.

Although Salim Barakat is one of the most renowned and respected contemporary writers in Arabic letters, he remains virtually unknown in the English-speaking world. This first collection of his poetry in English, representing every stage of his career, remedies that startling omission. Come, Take a Gentle Stab features selections from his most acclaimed works of poetry, including excerpts from his book-length poems, rendered into an English that captures the exultation of language for which he is famous.

A Kurdish-Syrian man, Barakat chose to write in Arabic, the language of cultural and political hegemony that has marginalized his people. Like Paul Celan, he mastered the language of the oppressor to such an extent that the course of the language itself has been compelled to bend to his will. Barakat pushes Arabic to a point just beyond its linguistic limits, stretching those limits. He resists coherence, but never destroys it, pulling back before the final blow. What results is a figurative abstraction of struggle, as alive as the struggle itself. And always beneath the surface of this roiling water one can glimpse the deep currents of ancient Kurdish culture.
Salim Barakat is a Kurdish-Syrian writer who has published dozens of novels and poetry anthologies. Raised in northern Syria, he lived in Beirut and Cyprus before settling in Sweden, where he lives today.

Huda J. Fakhreddine is associate professor of Arabic literature at the University of Pennsylvania. She is a translator of Arabic poetry and the author of several scholarly books.

Jayson Iwen is the author of several books. He is professor of writing and English literature at The University of Wisconsin–Superior.
"Kurdish, reclusive, demanding, inventive to the point of miracle, prolific to the point of cataracts—in the republic of Arabic letters, Salim Barakat stands apart."
— 4Columns

“Barakat’s exceedingly resistant and exhilaratingly strange verse—paradoxically written by someone who seems absolutely rooted to the depths of the earth while yet able to see humanity as if through the mind of some other being, perhaps language itself—is finally available to English readers. One can only hope that Huda Fakhreddine and Jayson Iwen’s resounding translation summons greater interest in the work of this astonishing modern master.”
— Ammiel Alcalay, poet, scholar, critic, and translator