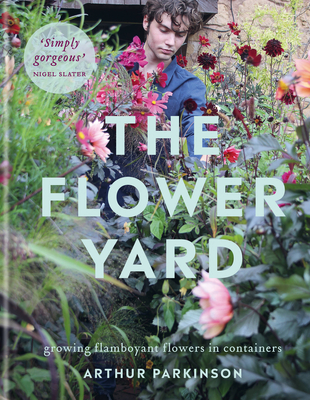 
Available in Warehouse. Wait for Email Confirmation for ETA
'The Flower Yard is simply gorgeous. Inspirational, sumptuous and packed with refreshingly down-to-earth advice. I love this book.' Nigel Slater

Arthur Parkinson's town garden is like a path of pots, a tiny, exposed stage on bricks. Despite its small size, a flower-filled jungle in Venetian tones is grown here each year, in defiance of urbanisation. The plants act like drapes, closing gently as their growth engulfs the front door, from either side of the path, to the buzz of precious bees.

This is gardening done entirely in pots, yet on a grand scale that will inspire anyone who wants their doorstep or patio to be a glamorous and lively canvas that nurtures them visually and mentally. From jewel scatterings of crocus, flocks of parrot tulips and scented sweet peas to galaxies of single dahlias, towering giraffes of amaryllises grown inside for winter and endless vases of cut blooms through the seasons.

With his bantam hens at his feet, Arthur shares his life, knowledge, flair and influences for planting creatively, all of which combine to create a space that's rich in ever-changing colour and life.
Arthur Parkinson trained at Kew Gardens and after graduating went to work for Sarah Raven at her farm in East Sussex to pursue his passion for growing cut flowers. He later became gardener for the potter, Emma Bridgewater, at her factory in Stoke-on-Trent. The garden he designed there, featuring his beloved chickens, received great acclaim and became the focus for his first book, The Pottery Gardener. In spring 2018, Arthur was named as one of the UK's young gardening stars by Architectural Digest. Arthur writes for the Telegraph, taking his own photographs of flowers and poultry, and has appeared on BBC 2's Gardeners' World. He lives in Nottinghamshire but he still travels regularly to Sussex where he assists Sarah Raven with her floristry. @arthurparkinson_
“The book is part stunning photographic ode to Parkinson’s green thumb (he trained at Kew Gardens and with Sarah Raven) and part how-to-guide on cultivating a wild world of plants in a modest dwelling.”
—Vogue