The Ceremonies of the Roman Rite Described (Hardcover) 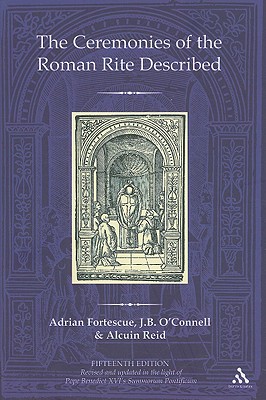 The Ceremonies of the Roman Rite Described (Hardcover)

'This book, a classic guide to the celebration of the Church's ancient Gregorian Rite in the English-speaking world, will serve priests and seminarians of the twenty-first century--just as it served so many priests of the twentieth--in their pastoral mission, which now necessarily includes familiarity with and openness to the use of the older form of the sacred liturgy. I happily commend it to the clergy, seminarians and laity as a reliable tool for the preparation and celebration of the liturgical rites authoritatively granted by the Holy Father in Summorum Pontificum.
'I congratulate the distinguished liturgical scholar, Dr. Alcuin Reid, for his care and precision in ensuring that this revised edition conforms to the latest authoritative decisions with regard to these liturgical rites. As Pope Benedict XVI wrote in his letter which accompanied Summorum Pontificum: In the history of the liturgy there is growth and progress, but no rupture. The Gregorian Rite is today a living liturgical rite which will continue its progress without losing any of its riches handed on in tradition. For as the Holy Father continued, What earlier generations held as sacred, remains sacred and great for us too, and it cannot be all of a sudden entirely forbidden or even considered harmful. It behoves all of us to preserve the riches which have developed in the Church's faith and prayer, and to give them their proper place. May this book assist the Church of today and of tomorrow in realising Pope Benedict's vision.'
Dar o Cardinal Castrill n HoyosPresident, Pontifical Commission Ecclesia Dei
This fifteenth edition, revised in the light of Pope Benedict XVI's reforms and expanded and corrected throughout, includes a new chapter on the music of solemn and sung Mass as well as clarifications of questions that have arisen in the light of recent experience. It gives descriptions of the rites of pontifical, solemn and low Mass, Vespers, the liturgical year including Holy Week, the sacraments, Benediction of the Blessed Sacrament, funerals, episcopal visitation and more.

Canon J.B.OConnell ( d. 1977). Ceremonial and rubrics were his life's work and on the death of Adrian Fortescue in 1923, he was asked to prepare the third edition of this book. Over the next forty years he prepared a further nine editions. Canon OConnell was a secular priest of the Menevia Diocese. Alcuin Reid, author of "The Organic Development of the Liturgy, " is a leading international liturgical scholar. He lives in Southern France where he serves in the Catholic Diocese of Frejus-Toulon.""