The Story of the Iliad: A Dramatic Retelling of Homer?s Epic and the Last Days of Troy (Paperback) 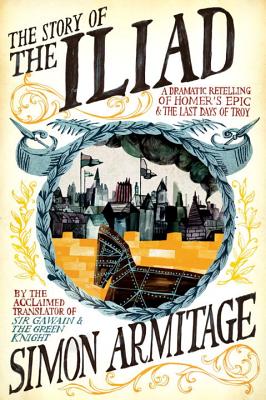 The Story of the Iliad: A Dramatic Retelling of Homer?s Epic and the Last Days of Troy (Paperback)

Award-winning poet Simon Armitage dramatizes the story of Troy, animating this classic epic for a new generation of readers.

Following his highly acclaimed dramatization of the Odyssey, Simon Armitage here takes on the fate of Troy, bringing Homer’s Iliad to life with refreshing imaginative vision. In the final days of the Trojan War, the Trojans and the Greeks are caught in a bitter stalemate. Exhausted and desperate after ten years of warfare, gods and men battle among themselves for the glory of recognition and a hand in victory. Cleverly intertwining the Iliad and the Aeneid, Armitage poetically narrates the tale of Troy to its dire end, evoking a world plagued by deceit, conflict, and a deadly predilection for pride and envy. As with the Odyssey, Armitage reveals the echoes of ancient myth in our contemporary war-torn landscape, and reinvigorates the classic epics with adventure, passion, and, surprisingly, Shakespearean wit.

Praise for The Odyssey: A Dramatic Retelling of Homer’s Epic:

“So superb. . . . Armitage ’s love of the Greek epic is evident in almost every line.”—New York Times

Simon Armitage is Professor of Poetry at the University of Leeds and from 2015 to 2019 served as the Oxford Professor of Poetry. He has published ten collections of poetry and is the author of four stage plays, over a dozen television films, a libretto, two novels, and three memoirs. His poetry has won numerous awards, including a Gregory Award, a Forward Prize, a Lannan Literary Award, and the Queen’s Gold Medal for Poetry. In 2019 he was appointed Poet Laureate of the United Kingdom.
[I]mpressive…[A] finely written
dramatized narrative….The real strength of Armitage's play lies in its ability
to encapsulate key Homeric events, from the opening quarrel between Agamemnon
and Achilles – and in the vitality of its language. Like all good poets,
Armitage uses prose with absolute precision and his dialogue is sinewy, alert
and speakable.
— The Guardian

An accessible, absorbing evening of mythic storytelling.
— The Times

[B]rings vigorously to life the tragedy of the Iliad…[A] faithful rendition of the great story.
— The Daily Mail

[A] vision of the siege of Troy at its most gruelingly brutal.
— London Evening Standard

Armitage has opted for an account which is pared to the blood-stained bone. Its great economy emphasizes the drama without sacrificing poetic allusion.
— The Independent