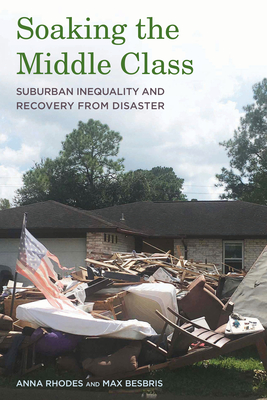 
Backordered - ETA Unknown
Extreme weather is increasing in scale and severity as global warming worsens. While poorer communities are typically most vulnerable to the negative effects of climate change, even well-resourced communities are increasingly vulnerable as climate-related storms intensify. Yet little is known about how middle-class communities are responding to these storms and the resulting damage. In Soaking the Middle Class, sociologists Anna Rhodes and Max Besbris examine how a middle-class community recovers from a climate-related disaster and how this process fosters inequality within these kinds of places.

In 2017, Hurricane Harvey dropped record-breaking rainfall in Southeast Texas resulting in more than $125 billion in direct damages. Rhodes and Besbris followed 59 flooded households in Friendswood, Texas, for two years after the storm to better understand the recovery process in a well-resourced, majority-White, middle-class suburban community. As such, Friendswood should have been highly resilient to storms like Harvey, yet Rhodes and Besbris find that the recovery process exacerbated often-invisible economic inequality between neighbors. Two years after Harvey, some households were in better financial positions than they were before the storm, while others still had incomplete repairs, were burdened with large new debts, and possessed few resources to draw on should another disaster occur.

Rhodes and Besbris find that recovery policies were significant drivers of inequality, with flood insurance playing a key role in the divergent recovery outcomes within Friendswood. Households with flood insurance prior to Harvey tended to have higher incomes than those that did not. These households received high insurance payouts, enabling them to replace belongings, hire contractors, and purchase supplies. Households without coverage could apply for FEMA assistance, which offered considerably lower payouts, and for government loans, which would put them into debt. Households without coverage found themselves exhausting their financial resources, including retirement savings, to cover repairs, which put them in even more financially precarious positions than they were before the flood.

The vast majority of Friendswood residents chose to repair and return to their homes after Hurricane Harvey. Even this devastating flood did not alter their plans for long-term residential stability, and the structure of recovery policies only further oriented homeowners towards returning to their homes. Prior to Harvey, many Friendswood households relied on flood damage from previous storms to judge their vulnerability and considered themselves at low risk. After Harvey, many found it difficult to assess their level of risk for future flooding. Without strong guidance from federal agencies or the local government on how to best evaluate risk, many residents ended up returning to potentially unsafe places.

As climate-related disasters become more severe, Soaking the Middle Class illustrates how inequality in the United States will continue to grow if recovery policies are not fundamentally changed.

MAX BESBRIS is Assistant Professor of Sociology, University of Wisconsin-Madison


"A hurricane force wind or a massive surge of seawater can lay much bare—including, it turns out, some of the usually-hidden class patterns of middle America. This fascinating account is helpful preparation for a century where disaster is going to be ever more common."
—BILL MCKIBBEN , author The Flag, the Cross, and the Station Wagon: A Graying American Looks Back at His Suburban Boyhood and Wonders What the Hell Happened

“Soaking the Middle Class tells the complex story of disaster recovery in a White middle-class suburb. It is driven by the chilling narrative of the water rising, escape, and inspiring and awesome stories of rebuilding. But not everyone rebounds the same. Behind an appearance of homogeneity are forces—both structural and individual—that widen gaps in wealth and resources. As an ever more volatile environment threatens to soak us all, this book is essential reading for how to create a broader and more equitable safety net.”

“A powerful book about one of the most urgent problems of the century: how to avoid going under in an era of catastrophic climate change. Drawing on an unusually deep and extensive study of an inundated suburban community, Anna Rhodes and Max Besbris show how class-based inequalities determine who bounces back from disaster and who gets bogged down or displaced. Soaking the Middle Class is timely and important for everyone who calls this warm, wet planet home.”

“As climate change causes more extreme weather many middle-class Americans assume that their financial and social resources, their insurance, as well as help from the government, would protect them from financial ruin should they be caught in a disaster. In this eye-opening sociological account of how Hurricane Harvey affected one middle class suburb in Houston, Anna Rhodes and Max Besbris show that the disaster had very unequal effects, with some people able to build back better, and others not able to get back on their feet. Soaking the Middle Class is a cogently argued and wide-ranging book that opens our eyes to how disaster puts us all at risk.”