The Courting of Marcus Dupree (Paperback) 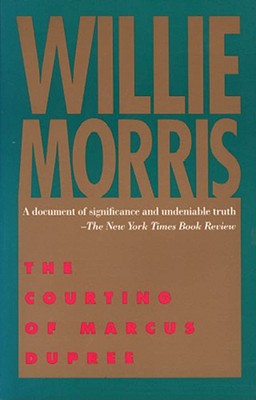 The Courting of Marcus Dupree (Paperback)


Available in Warehouse. Wait for Email Confirmation for ETA
At the time of Marcus Dupree's birth, when Deep South racism was about to crest and shatter against the Civil Rights Movement, Willie Morris journeyed north in a circular transit peculiar to southern writers. His memoir of those years, North Toward Home, became a modern classic. In The Courting of Marcus Dupree he turned again home to Mississippi to write about the small town of Philadelphia and its favorite son, a black high-school quarterback. In Marcus Dupree, Morris found a living emblem of that baroque strain in the American character called "southern."

Beginning on the summer practice fields, Morris follows Marcus Dupree through each game of his senior varsity year. He talks with the Dupree family, the college recruiters, the coach and the school principal, some of the teachers and townspeople, and, of course, with the young man himself. As the season progresses and the seventeen-year-old Dupree attracts a degree of national attention to Philadelphia neither known.

Willie Morris (1934-1999), a native Mississippian, came to national prominence in the early 1960s as the youngest-ever editor of Harper's magazine. His first book, North Toward Home, became an instant classic. Among his other notable books are New York Days, My Dog Skip, and My Mississippi, published by University Press of Mississippi.