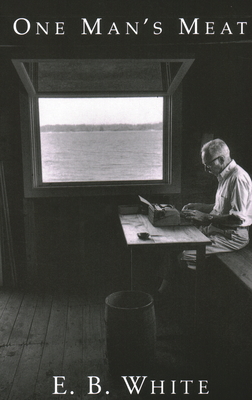 In print for fifty-five years, One Man's Meat continues to delight readers with E.B. White's witty, succinct observations on daily life at a Maine saltwater farm.

Too personal for an almanac, too sophisticated for a domestic history, and too funny and self-doubting for a literary journal, One Man's Meat can best be described as a primer of a countryman's lessons a timeless recounting of experience that will never go out of style.

E.B. White, the author of twenty books of prose and poetry, was awarded the 1970 Laura Ingalls Wilder Medal for his children's books, Stuart Little and Charlotte's Web. This award is now given every three years "to an author or illustrator whose books, published in the United States, have, over a period of years, make a substantial and lasting contribution to literature for children." The year 1970 also marked the publication of Mr. White's third book for children, The Trumpet of the Swan, honored by The International Board on Books for Young People as an outstanding example of literature with international importance. In 1973, it received the Sequoyah Award (Oklahoma) and the William Allen White Award (Kansas), voted by the school children of those states as their "favorite book" of the year.
Born in Mount Vernon, New York, Mr. White attended public schools there. He was graduated from Cornell University in 1921, worked in New York for a year, then traveled about. After five or six years of trying many sorts of jobs, he joined the staff of The New Yorker magazine, then in its infancy. The connection proved a happy one and resulted in a steady output of satirical sketches, poems, essays, and editorials. His essays have also appeared in Harper's Magazine, and his books include One Man's Meat, The Second Tree from the Corner, Letters of E.B. White, The Essays of E.B. White and Poems and Sketches of E.B. White. In 1938 Mr. White moved to the country. On his farm in Maine he kept animals, and some of these creatures got into his stories and books. Mr. White said he found writing difficult and bad for one's disposition, but he kept at it. He began Stuart Little in the hope of amusing a six-year-old niece of his, but before he finished it, she had grown up.
For his total contribution to American letters, Mr. White was awarded the 1971 National Medal for Literature. In 1963, President John F. Kennedy named Mr. White as one of thirty-one Americans to receive the Presidential Medal for Freedom. Mr. White also received the National Institute of Arts and Letters' Gold Medal for Essays and Criticism, and in 1973 the members of the Institute elected him to the American Academy of Arts and Letters, a society of fifty members. He also received honorary degrees from seven colleges and universities. Mr. White died on October 1, 1985.
Modest in its size and presumptions, engaging in
tone...resisted becoming historic...nonstop run of 55 years in print.
— New York TImes Book Review