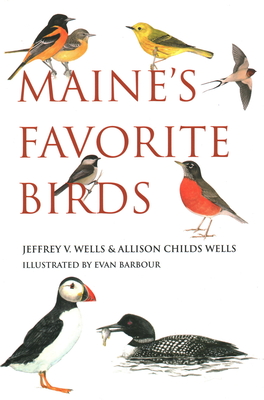 From lush forests and rocky coastlines to lakes, mountains, and rolling fields, spectacular natural beauty and diverse habitats make Maine a wonderful place for seeing and hearing some of North America's most iconic birds. This fresh new book highlights the birds that are loved by Mainers and essential to why millions of tourists visit each year.

Written by well-known birders and native Mainers, and based on their years of experience answering questions, leading bird walks, and teaching people about birds, Maine's Favorite Birds puts the focus on Maine's most-loved and best-known birds. This makes the book uniquely suited to bird enthusiasts who want to identify and learn more about the birds around them without the expense and confusion of more advanced field guides. Maine's Favorite Birds features each bird beautifully illustrated in large format, accompanied by clear and concise identification tips, habitat references, and easy-to-remember song descriptions. It also includes birding hot spots and ways birders can put their observations to use for science and conservation. Maine's Favorite Birds is perfect for everyone from kids to grandparents, parents to teachers, Mainers and tourists alike anyone who wants to know and better appreciate the birds they see in backyards, parks, wild areas, and nature preserves.

Jeffrey V. Wells and Allison Childs Wells are native Mainers are both lifelong birders. They began birding together when they met in college. After graduating from the University of Maine at Farmington, they went on to graduate programs at Cornell University in Ithaca, New York, where Jeff received his M.S. and Ph.D. and Allison, her M.F.A. Both stayed on at Cornell, Allison as communications director for the world-renowned Cornell Lab of Ornithology, and Jeff, also at the Lab, as director of Bird Conservation for National Audubon (first for New York State then for the U.S.). They have published hundreds of bird-related articles and have collaborated on many projects, including as co-contributors to the Sibley Guide to Bird Life and Behavior and as creators and webmasters of the websites Arubabirds.com and Bonairebirds.com, which provide field identification and bird-finding information about the birds of these popular vacation islands. Jeff is also author of Birder's Conservation Handbook: 100 North American Birds at Risk, published in October 2007 by Princeton University Press, and editor of Boreal Birds of North America, published in 2011 by University of California Press.

Allison Childs Wells was coeditor of Birder’s Life List and Diary (third edition) and contributed many bird family accounts to Scholastic’s New Book of Knowledge. Jeff is now senior scientist for the International Boreal Conservation Campaign and is a visiting fellow at the Cornell Lab of Ornithology. Allison is senior director of public affairs for the Natural Resources Council of Maine.

Evan Barbour earned his B.A. from Reed College with a thesis on animal play behavior and a credential in scientific illustration from UC Santa Cruz. Following a stint at the Cornell Lab of Ornithology, his illustrations have adorned magazines such as National Parks Magazine and books such as South Pacific Birds. Also an educator with tenure at the California Academy of Sciences, Evan’s current pursuit of a M.F.A. at Mills College further enables him to explore the intersection between art and science. Wherever his pursuits take him, Evan maintains an avid interest in birding.