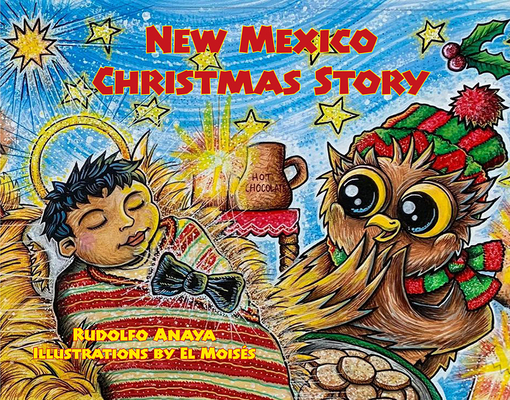 
On Our Shelves as of 9am Today
Acclaimed New Mexico author Rudolfo Anaya presents a northern New Mexico Christmas tale in this third volume from his Owl in a Straw Hat series featuring the loveable Ollie Tecolote and his Wisdom School classmates Uno the Unicorn, Jackie Jackalope, Bessie Beaver, Sally Skunk, Robbie Rabbit, and Ninja Raccoon. The story begins on Christmas Eve morning in Chimayó and the students play in the snow and decorate a Christmas tree for the classroom. They are looking forward to the evening’s activities. Nana, their teacher, is making posole and chile colorado and has invited some special guests to join them for dinner. After that Nana says they’ll walk to El Santuario to visit the Santo Niño and promises hot chocolate and biscochitos afterward! Along the way, they will act the parts of the shepherds in Los pastores, the Shepherds’ Play, which is about shepherds visiting the newborn baby Jesus and bringing him gifts. At the end of their journey, they too will visit the Nativity and bring their own gifts on this magical night.
Rudolfo Anaya, considered the father of Chicano literature, is the author of the beloved classic Bless Me, Ultima, which was adapted into a feature film in 2013. In 2016, Anaya received the National Medal of Arts presented by President Barack Obama. His children’s books include Owl in a Straw Hat, No More Bullies!/¡No Más Bullies!: Owl in a Straw Hat 2, Rudolfo Anaya’s The Farolitos of Christmas, The First Tortilla, Roadrunner’s Dance, and The Santero’s Miracle. Anaya is professor emeritus of English at the University of New Mexico where he taught for thirty years. He lives in Albuquerque.