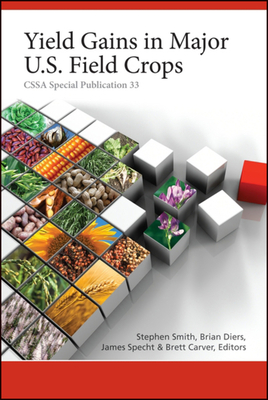 
Available in Warehouse. Wait for Email Confirmation for ETA
This book cannot be returned, cancelled, or exchanged. Please call for availability and pricing
When humankind began to save seed to plant for the next season, they did so hoping to secure a food supply for the future. With that came the inevitable question: Will it be enough? Scientists today are still asking that question. Our dependence on domesticated cultivated varieties has never been greater, even as increasing populations strain our resource base. This book provides a fascinating snapshot-in-time account of the productivity status of all major U.S. field crops. Each crop has a different story to tell. Plant breeding, biotechnology, and agronomy have shaped these stories. It is imperative that we learn from them to ensure continued productivity. The solution is long-term stewardship and the most effective use of our critical resources--water, soil, genetic resources, and human intellect.
Stephen Smith is a Research Fellow at DuPont Pioneer. He directs a group that develops molecular tools to characterize and protect intellectual property vested in germplasm and traits. Research interests include genetic diversity, germplasm access and benefit sharing, use of morphological and molecular data for variety identification, pedigree analysis of crop varieties, and economic and genetic diversity aspects of intellectual property protection. Dr. Smith is a Fellow of CSSA and received the 2005 ASTA Chairman's Distinguished Service Award. He serves on the U.S. National Genetic Resources Advisory Council and chairs the DuPont Pioneer Genetic Resources Issues Team. Brian Diers is a Professor in the Crop Sciences Department at the University of Illinois. Dr. Diers leads a soybean breeding and genetics program and teaches introductory genetics. His research focuses on utilizing exotic germplasm to improve the disease and pest resistance and yield potential of soybean. A major contribution of his program has been the mapping and utilization of genes that provide resistance to soybean cyst nematode, soybean aphid, and sudden death syndrome. In addition, he is mapping genes from exotic germplasm that can increase seed yield. James Specht is a Professor of the Department of Agronomy and Horticulture at the University of Nebraska-Lincoln. His research focus is soybean genetics/genomics and crop physiology/production. He was a member of the international research group that sequenced the soybean genome. He has mapped several genes that control soybean seed protein and oil content and is a member of a national team whose current research is improving the drought tolerance of soybean. He is the recipient of the CSSA Research Award, ASA Agronomic Achievement Award-Crops, American Soybean Association Production Research Award, and is a Fellow of AAAS, ASA, and CSSA. Brett Carver is a Regents Professor at Oklahoma State University and holds the Wheat Genetics Chair in Agriculture. Carver's research encompasses a comprehensive winter wheat breeding and genetics program, dedicated to developing cultivars for the U.S. Great Plains. He is responsible for GrazenGrain, which targets wheat development for improved performance in dual-purpose management systems. He chairs the National Wheat Improvement Committee and serves on the scientific advisory board of the Wheat Foods Council. He is a recipient of the 2012 Friend of Wheat Award from the Na-tional Association of Wheat Growers, and is a Fellow of CSSA and ASA.