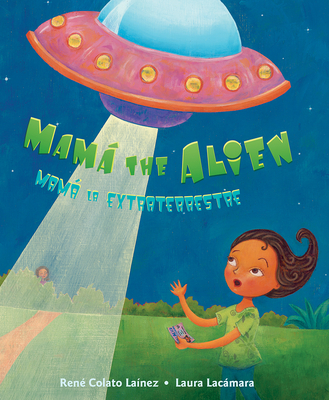 
This title is likely unavailable. Email or call for price and availability.
Bilingual English/Spanish. In this lighthearted bilingual immigration story, a young girl sees the word alien on her mother's Resident Alien card and concludes that her mother is from another planet until the girl finds out that the word has more than one meaning.

When Mam 's purse falls on the floor, Sofia gets a peek at Mam 's old Resident Alien card and comes to the conclusion that Mam might be an alien from outer space. Sofia heads to the library to learn more about aliens. Some are small and some are tall. Some have four fingers on each hand and some have large, round eyes. Their skin can be gray or blue or green. But Mam looks like a human mother Could she really be an alien?

Sofia is still puzzling out this mystery when she sees an alien-looking Mam one night. It turns out Mam is doing a beauty treatment so she will look her best for her citizenship ceremony. That's when Sofia realizes that in English, an alien can be someone from another planet, and it can also be a person from another country. Just like Mam

Filled with imagination and humor, this title is a sweet and timely celebration of family, no matter where that family comes from. Even if it's outer space.