The Way of Hermes: New Translations of The Corpus Hermeticum and The Definitions of Hermes Trismegistus to Asclepius (Paperback) 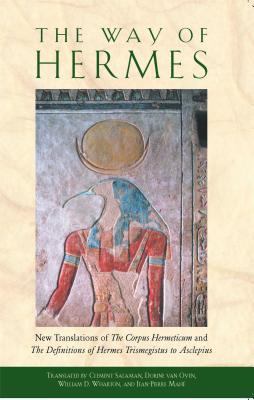 The Way of Hermes: New Translations of The Corpus Hermeticum and The Definitions of Hermes Trismegistus to Asclepius (Paperback)


Available in Warehouse. Wait for Email Confirmation for ETA
Paperback edition of the recent translation of the esoteric masterpiece, including the first English translation of The Definitions of Hermes Trismegistus to Asclepius

• A resource for scholars and religious seekers alike

The Corpus Hermeticum, a powerful fusion of Greek and Egyptian thought, is one of the cornerstones of the Western esoteric tradition. A collection of short philosophical treatises, it was written in Greek between the first and third centuries C.E. and translated into Latin during the Renaissance by the great scholar and philosopher Marsilio Ficino. These treatises were central to the spiritual work of hermetic societies in Late Antique Alexandria (200-700 C.E.) and aimed to awaken gnosis, the direct realization of the unity of the individual and the Supreme.

In addition to this new translation of The Corpus Hermeticum, which seeks to reflect the inspirational intent of the original, The Way of Hermes includes the first English translation of the recently rediscovered manuscript of The Definitions of Hermes Trismegistus to Asclepius, a collection of aphorisms used by the hermetic student to strengthen the mind during meditation. With the proper mental orientation, a state of pure perception can be achieved in which the true face of God appears. This document is of enormous value to the contemporary student of gnostic studies for its insights into the actual workings of this spiritual path.
Clement Salaman is the editor of the English translation of The Letters of Marsilio Ficino.

Dorine van Oyen is a lecturer on hermetic studies in Amsterdam.

Jean-Pierre Mahé is correspondent of the Académie des Inscriptions et Belles Lettres, Paris.
The Corpus Hermeticum is a key work standing between ancient Greek civilization and the dawn of Christianity. This work dates from the very beginning of the First Millennium. This important work was previously available to the English reader only in Sir Walter Scott's rather loose and inaccurate translation. The translators of this edition have been at the forefront of the much-acclaimed volumes of translations of The Letters of Marsilio Ficino, the father of the Florentine Renaissance, who himself first translated the Hermetica into Latin. This translation has a much greater accuracy and feel for the subject than Scott's translation. This edition also includes the first published translation by Professor Mahe of The Definitions of Hermes Trismegistus to Asclepius from a recently re-discovered Greek manuscript in the Bodleian Library."
— Stephen Hill, Watkins Books

"By all standards, The Way of Hermes is the kind of contribution students of Hermeticism have been waiting for, for a long time.The Way of Hermes is a small book that will not be read quickly, and will take a lifetime to understand."
— Institute for Hermetic Studies, Feb 2006