The Naked Warrior: Master the Secrets of the super-Strong--Using Bodyweight Exercises Only (Paperback) 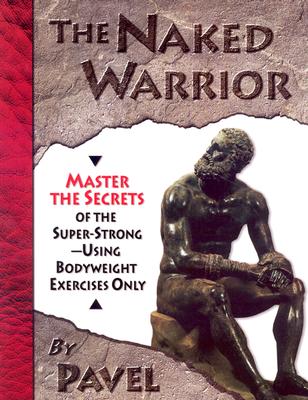 The Naked Warrior: Master the Secrets of the super-Strong--Using Bodyweight Exercises Only (Paperback)


This title is likely unavailable. Email or call for price and availability.
Have you noticed-the greater a man's skill, the more he achieves with less? And the skill of strength is no exception. From the ancient days of Greek wrestling, to the jealously guarded secrets of Chinese Kung Fu masters, to the hard men of modern spec ops, warriors and allied strongmen have developed an amazing array of skills for generating inhuman strength.But these skills have been scattered far and wide, held closely secret, or communicated in a piecemeal fashion that has left most of us frustrated and far from reaching our true strength potential.Now, for the first time, Russian strength expert and former Spetsnaz instructor Pavel has gathered many of these devastating techniques into one highly teachable skill set. In The Naked Warrior Pavel reveals exactly what it takes to be super-strong in minimum time-when your body is your only tool.

Pavel Tsatsouline, is a former Soviet Special Forces physical training instructor, who helped Dragon Door Publications initiate the modern kettlebell movement. Pavel is regarded as one of the premier strength authorities in the world today, having created the first-ever kettlebell instructor certification system and being the author of the first-ever book on the subject of kettlebell training.