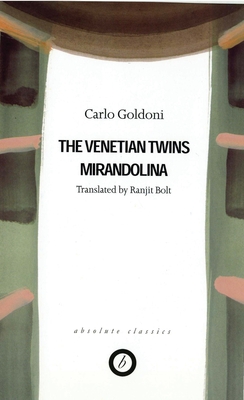 In the year of the bicentenary of the death of Carlo Goldoni, one of Italy's most brilliant dramatists, two of his greatest comedies are brought to life in Ranjit Bolt's vibrant translations.

The Venetian Twins is a classic tale of mistaken identity and the ensuing confusion. The play was given its premiere at the Royal Shakespeare Company in a production directed by Michael Bogdanov which enjoyed huge success in Stratford and London. Mirandolina is one of Goldoni's best known works and this translation was produced at the Royal Lyceum, Edinburgh.
Born in Manchester in 1959, Ranjit Bolt was educated at Perse School and at Balliol College, Oxford. He worked as an investment analyst and advisor for eight years, before concentrating on theatre translation from the end of 1990. Ranjit Bolt's acclaimed translations for the theatre, many of which are published by Oberon Books, include works by Moliere, Seneca, Sophocles, Corneille, Beaumarchais, Brecht, Goldoni and Zorilla.