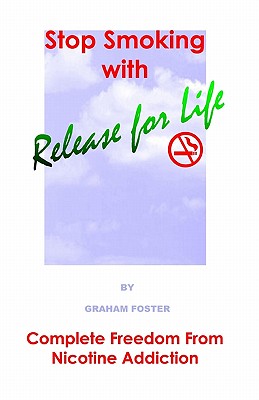 
Available in Warehouse. Wait for Email Confirmation for ETA
This book cannot be returned, cancelled, or exchanged. Please call for availability and pricing
How a Simple Idea Made Me Permanently Free and a Better, Healthier and Fitter Person Release for Life will enable you to have that idea to stop smoking easily and permanently for yourself. -Do you want to be able to stop smoking easily so that you can be fit & healthy? -Do you want to stay stopped with NO cravings for the rest of your life so you are permanently free from the slavery? -Do you want to know without doubt when the right time to quit is for you? Do you want to feel clean, avoid cancer and early death while also saving lots of money to spend on whatever you wish . . . -Do the cravings defeat you each time you try to stop? -Are you wondering WHEN is the best time for you to have the most chance of success? -Are you concerned about putting on weight? The answer to nicotine addiction is to tackle the addiction so that you no longer smoke because you no longer wish or need to smoke so you just don't - and you feel this way permanently, for the rest of your life Release for Life guides your mind through all the sub-conscious reasons there are to smoke and destroys them The way to permanent freedom is to know exactly how the addiction works. Once you have this knowledge you can no longer be addicted and you are free. HOW IT WORKS Certain obstacles seem to make stopping almost impossible: - -Fear of failing - again -Doubting if you truly want to stop, or have enough willpower? -Fear of cravings and discomfort -Concerned that if you do stop you won't know how to relax or concentrate? -It's difficult, all my friends smoke, I'll miss out on the pleasure and the relief, and then there's those cigarettes after meals . . . Release for life deals finally with all these obstacles and many more, so that your mind can become free from the addiction and stopping smoking and staying stopped becomes so easy it is nothing at all.
Hi, my name is Graham Foster. I was a smoker from the age of 15 to 40. When I was fifteen years old I was one of those people who were not going to take up smoking. My friends and I went on a school trip to Germany where, because of being able to get alcohol at a younger age, we got drunk quite a lot. It was in one of these drunken states that we came upon the idea of trying a cigarette. The first one or two we didn't inhale but as we became braver we began inhaling just a bit. When we started inhaling properly we felt nauseated and dizzy and tried to resist coughing but of course we coughed anyway. So we tried again the next night and the next night and the next. We felt proud of ourselves for being able to smoke and yet we weren't hooked so the fear of becoming hooked had gone. The memory is a little hazy after that but it wasn't long before I remember being quite astonished and very worried that every time I decided not to smoke any more, after a while I would experience a panic attack and smoke again. I was never a happy smoker. I would try to stop time and time again, yet I just continued to smoke more and more. Most of the time I just accepted it but I always felt that one day I would stop. I tried cold turkey, I tried going on holiday, and I tried staying in the bedroom. I tried nicotine gum and patches and inhalers, I even tried acupuncture and hypnotism. It never worked. Eventually I found the secret formula to stop and stay stopped easily and without cravings. In addition to this I also developed other serious addictions that devastated my life. I became an alcoholic and a drug addict. I have had to find a way out of all these addictions in order to get my life back. When I eventually overcame all my addictions I trained as a teacher. After this, I became a trainer in one of the biggest companies in the world. I found I had some talent in communicating information and concepts to others. Putting this together with my life experience I developed a treatment for drug and alcohol addiction. I am currently the Director of Addiction Recovery Centre in Portsmouth, England, which is an established residential rehab. I first got clean and sober from drink and drugs in March 1995. It took me another five years of trial and error before I hit upon the right formula for stopping smoking permanently and easily. I eventually won that battle in early 2000 and have not suffered any cravings since.