Sundays with Walt and Skeezix (Hardcover) 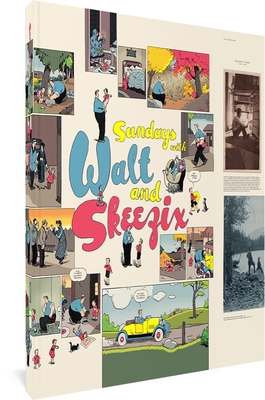 Collected for the first time here are the best of King's early Gasoline Alley Sunday comics, starting from the very first Sunday in 1921, reprinted in the original size and colors.

King's innovations in art, layout and storytelling brought a new warmth and style to the medium at the dawn of the Golden Age of newspaper comic strips. If you are interested in the development of this unique American art form, or simply love beautiful comics, this sumptuous volume is a masterpiece in comic art, and a must for your collection.

Like McCay, Feininger, Herriman, and others of that era, King was a graphic innovator. His panoramic layouts, themed styling, and whimsical cartoon conceits explored new artistic methods. But he also had a great knowledge of story and character, presented with a warmth and humanity never seen before in comics, and rarely done as well since. He went beyond the gags and slapstick of his contemporaries to create vignettes of genuinely human characters; showing them relating to each other and, particularly in his Sunday comics, to the world around them.

One of the pioneering giants of American comic strips, Frank King was born in Cashton, Wisconsin, in 1883. He joined the staff of the Chicago Tribune in 1909. Almost from the start of his career, King's cartoons were frequently featured on the front page of the paper. He made his lasting mark in 1919 by creating Gasoline Alley, which became one of the most widely syndicated and read strips in North America until King's death in 1969.