I Am Who I Am: Trials and Tribulations of a Resolute Recruit (Paperback) 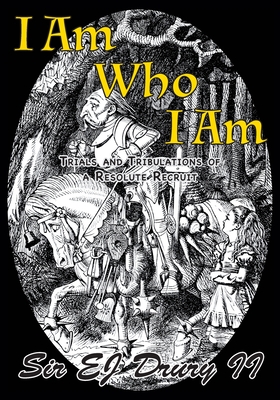 I Am Who I Am: Trials and Tribulations of a Resolute Recruit (Paperback)

Had Sir EJ Drury II not internalized the war he had been fighting as an irresolute recruit who had been condemned to the bowels of a man-o'-war for what he knew not, Sir EJ may well have written a different kind of sequel to 'A Different Kind of Sentinel'.

"No man of war nor destroyer's escort am I," had he declared to the ship's Captain, a pronouncement that would usher in another year of active imagination on the wings of the transcendent function by which he is guided, through dialogue with his unconscious, toward the person he is meant to become.

"How much longer do you think you can keep me from the true intent of these encounters?" Questions he the master of deceit.

"As long as there are images that can keep their secrets to themselves," replies the snake, "I shall prevail."

Stonewalled at every turn, is he led by the transcendent to seek help from an unlikely trio--a professor, an attorney and the First Lady of the Resistance--all of whom work no harder than the attorney to rescue him from the jaws of the beast, intent on sucking any semblance of a real life from him as it has from his fathers and countless other souls who have been forced to kill on command, or be killed, in opposition to every moral fiber of their bodies, the carnage of which cries out unceasingly, "but thou shalt not take another man's life, lest ye lose thine as recompense".

"Give me liberty or give me death," captures he the sentiment of a generation so hell-bent on serving the ego, they kill for it. "And that," says the author, "is the crux of the matter."