No Half Steppin' (Paperback): An Oral and Pictorial History of New York City Club the Latin Quarter and the Birth of Hip-Hop's Golden Era (Paperback) 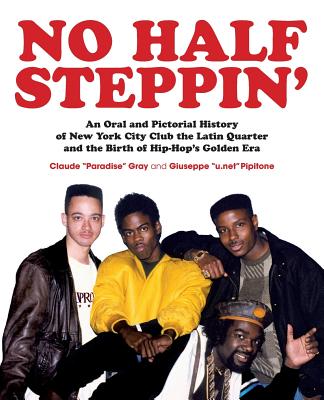 No Half Steppin' (Paperback): An Oral and Pictorial History of New York City Club the Latin Quarter and the Birth of Hip-Hop's Golden Era (Paperback)

Author Claude "Paradise" Gray was raised in the South Bronx. He was cofounder of the X Clan, whose 1990 album To the East, Blackwards is an Afrocentric and socio-politically conscious Golden Era hip-hop classic. Prior to that, he was host and entertainment manager for the Manhattan nightclub the Latin Quarter where he was a key figure in transforming it into an historical hip-hop venue. Paradise is also a noted writer, photographer, and hip-hop historian/archivist, as confirmed with this book, No Half Steppin', where his personal collection of photographs and memories--paired with an oral history from some of the club's most famous patrons--tell the story of the most important incubator of talent for the Golden Era of hip-hop.

During the mid- to late '80s, legends were born in that bustling Times Square club--from Stetsasonic, KRS-One, and Eric B. & Rakim to Queen Latifah, Public Enemy, and A Tribe Called Quest. It was the perfect recipe for success for unsigned and up-and-coming artists, as it was the ideal place to be seen and hone your craft--and music-industry A&Rs were on-site to snatch up the hottest rappers. You could walk into the club a nobody and come out a star.