Simulation and Game Technology in Medical Education: An Inquiry Into the Effectiveness of New Tools (Paperback) 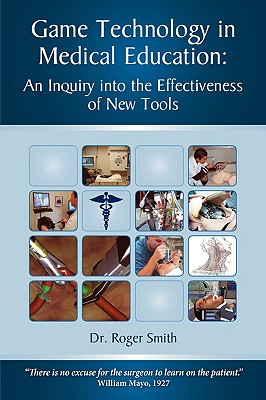 Simulation and Game Technology in Medical Education: An Inquiry Into the Effectiveness of New Tools (Paperback)


Available in Warehouse. Wait for Email Confirmation for ETA
This book cannot be returned, cancelled, or exchanged. Please call for availability and pricing
"The traditional Halstedian apprenticeship model of 'see one, do one, teach one' is no longer adequate to train surgeons, since good laparoscopic skills cannot be developed by merely watching an expert." - A. Pearson, M.D. This book proposes four hypotheses concerning the impact and acceptance of computer game technologies, virtual reality, and simulation in medical education. It focuses on laparoscopic surgery because of the similarities between that form of surgery and virtual reality systems. The evidence indicates that the following four hypotheses are supported by the medical research literature. Hypothesis 1: Surgical training can be accomplished at a lower cost using virtual reality and game technology-based tools than through existing methods of training. Hypothesis 2: Virtual reality and game technology-based training environments provide better access to representative patient symptoms and allow more repetitive practice than existing forms of training. Hypothesis 3: Virtual reality and game technology-based training environments can reduce the training time required to achieve proficiency in specific procedures. Hypothesis 4: Virtual reality and game technology-based training can reduce the number of medical errors caused by residents and surgeons learning to perform new procedures. The strong evidence collected in this study indicates that game-based systems are becoming much more accepted in medical education and that the technical limitations that existed when these devices were first introduced are being overcome. "There is no excuse for the surgeon to learn on the patient." - William Mayo, 1927.