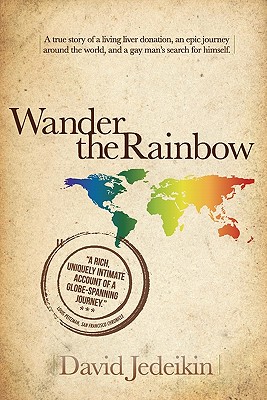 Seven months. Six continents. Twenty-nine countries. Some names changed to protect the (not-so) innocent. But everything else is true in Wander the Rainbow, a story of far-flung global exploration in the face of uniquely challenging life events.

When David Jedeikin's partner of three years becomes critically ill, the only way to save him is to volunteer as his living liver donor. But this ultimate act of sharing doesn't rescue their relationship, which ends soon after with the couple on opposite coasts.

Struggling to find perspective on these events, Jedeikin decides on a radical switch: he leaves everything behind--work, family, friends, even the beginnings of a new relationship--to embark on a seven-month trip around the world.

What unfolds is a dazzling array of experiences across six continents. Traveling as a flashpacker--backpacking with creature comforts--Jedeikin blends visits to gay nightspots with straight-edge sightseeing; unearths family roots in Latvia, China, Italy, Israel, and South Africa; learns the legacy of the Jews of Prague and Rome; and finds romance with a sex club bartender in Berlin, a Brazilian in Tokyo, and an exchange student in Beijing. From Viennese party hostels to Parisian models to hallucinogens in Cambodia, Wander the Rainbow is what happens when a career professional trades convention for a one-of-a-kind walkabout around Planet Earth.

A native of Montreal, Canada, David Jedeikin came to America in search of fame and fortune, but found greater fulfillment as a software engineer. He lives in San Francisco, California.