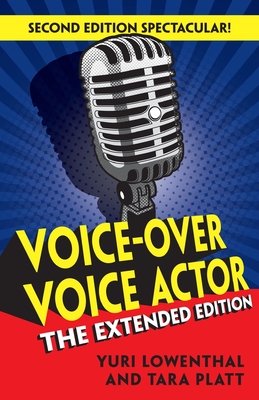 
Available in Warehouse. Wait for Email Confirmation for ETA
This book cannot be returned, cancelled, or exchanged. Please call for availability and pricing
Interested in Pursuing a Career in VO? Curious what goes on behind the scenes in a business where people talk funny for money? This updated edition of the award-winning first book offers a fun and comprehensive look at what it takes, what goes on, and what it's like behind the mic from two (still) working pros who started from scratch. In this book you will discover: - The ins and outs of auditioning - Vocal warm-ups and exercises - Tips for reading copy to maximum effect - Hints to help you stand out - Advice for setting up your own home studio - Keys to marketing yourself: demo > agent > job - What to expect when you book the job - A bonus workbook to hone your skills - Performance capture, podcasting, & more.
Yuri Lowenthal, in addition to being an unrepentant nerd, is an award-winning actor of stage, screen, and voice. He has worked on hundreds of video game titles, but may be best known for playing the titular roles in the popular Prince of Persia video game series and Insomniac's new Spider-Man game for the PS4. He's voiced multiple Supermen (mans?) and a host of other heroes for DC and Marvel animation, and is also particularly proud of his work on the Emmy-nominated Afro Samurai, Ben 10 for Cartoon Network, and Camp Camp for Rooster Teeth. Anime fans may also know him from such series as RWBY, Naruto, Gurren Lagann, Bleach, Code Geass, Persona, Durarara!! and the film Robotech: The Shadow Chronicles. You may also recognize him as the voice of ABC Comedy. For additional credits, fun facts, and information, please visit his website: www.YuriLowenthal.com or follow him on Twitter @YuriLowenthal. Tara Platt is not a nerd but is proudly married to one. She has performed internationally from London to New York to Los Angeles in film, TV, animation, and theatre. In the VO world, she is best known for her work on the Naruto series and video games as Temari, DC vs. MK as Wonder Woman, Legion of Superheroes, and Ben 10. Anime fans may also recognize her from animated series and features such as RWBY, Sailor Moon Crystal, Aggretsuko, Buso Renkin, and Persona; and from video games including League of Legends, Drakengard 3, Skylanders, Mafia III, World of Warcraft, Saints Row III, and Sunset Overdrive. Tara and Yuri's production company, Monkey Kingdom Productions, has two feature films, Tumbling After and Con Artists, in addition to comedy series Shelf Life (4 seasons) and Whatta Lark, and travel show Up, Up and Away (3 seasons and counting). Tara has also authored children's book Relax Your Toes and interactive journal Zartana. For more information on Tara, please visit her website: www.TaraPlatt. com or follow @TaraPlatt on Twitter.