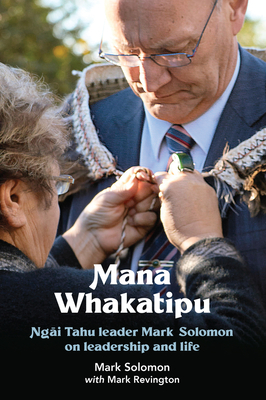 
Backordered - ETA Unknown
Head of his tribe at a critical moment, Mark Solomon can be credited with the astute stewardship of the settlement that has today made Ngai Tahu a major player in the economy and given it long-sought-after autonomy. Bold, energetic, and visionary, for 18 years he forged a determined course. Now, in this direct memoir, Sir Mark reflects on his life, on the people who influenced him, on what it means to lead, and on the future for both Ngai Tahu and Aotearoa New Zealand.
Sir Mark Wiremu Solomon KNZM, Ngai Tahu, Ngati Kuri, served as kaiwhakahaere of Te Runanga o Ngai Tahu, the tribal council of Ngai Tahu, for approximately 18 years, from 1998 until 2016. He was founder of the Iwi Chairs Forum, and stepped down as deputy chair of the Canterbury District Health Board in late 2020. Mark Revington is a freelance journalist who has worked for many leading publications including the National Business Review, the New Zealand Listener, and Unlimited. His awards include Westpac Financial Journalist of the Year and Business Magazine Editor of the Year. He spent around six years working for Te Runanga o Ngai Tahu.