My Week Beats Your Year: Encounters with Lou Reed (Hardcover) 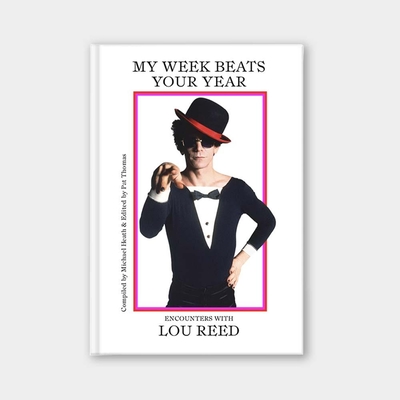 My Week Beats Your Year: Encounters with Lou Reed (Hardcover)

During his first major sit-down with the music press in 1977, between claiming all his songs were about guilt and revenge, Elvis Costello casually remarked, "I don't really listen to Lou Reed's records, but I never miss an interview with him."

Indeed, for all his publicly expressed loathing of the press in general and music journalists in particular, during his long career as a rock artist, Lou Reed was never less than entertaining in his dealings with the Fourth Estate. In fact, one could go so far as to claim that, for Lou, the press became as much an implement of expression as singing, composing, and playing music. In a style at times very much informed by his mentor Andy Warhol, Reed could play the media like a Marshall-amped Stradivarius.

To the majority of his fans, the apotheosis of Reed's relationship with the press, and most prominently regarded to this day, was the series of combative t te- -t tes between Lou and the late great music journalist Lester Bangs, published in CREEM Magazine during the 1970s.

My Week Beats Your Year: Encounters with Lou Reed features 30+ interviews spanning his solo career, from the golden era of print rock-journalism, to the first online blogs. The compilation is one fan's humble attempt to move beyond the Bangs canon, and delve deeper into the distance and intimacy, cactus and mercury, that constituted Lou's post-Velvet Underground public media image.

This anthology will be an intimate portrait of Reed who, in addition to being notoriously prickly (to put it mildly), was also intelligent, articulate, and deeply passionate about what was important to him, both as a person and as a creative artist.