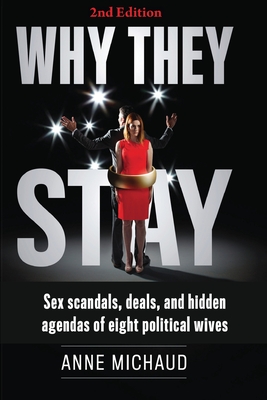 A journalist examines the patterns of behaviors among political wives from Eleanor Roosevelt to Melania Trump. The book answers the question why women stay in marriages after their husbands have cheated. Beyond the reasoning they have in common with private couples, there are political forces at work: power, building and bequeathing a legacy, and ensuring the husband's standing with voters and the political party.

Why do good women stay with bad men? What if political wives are just as calculating as their infamous husbands?

If Hilary Clinton had left her marriage, she might only be known as the spurned wife of a retired politician. Instead, she became the first woman to run for U.S. president on a major party ticket.

Veteran political journalist Anne Michaud knows the hidden agendas women employ to gain and cling to power. Working as a reporter for The Wall Street Journal and awarded "Columnist of the Year" by the New York News Publishers Association, Anne has researched the women behind some of the most notorious men in the public eye.

She discovered a surprising pattern as old as the dynastic maneuverings of England's medieval queens.

Today, women married to the "royalty" of our times-politicians-make bold decisions to keep their "thrones" and their families' history-making potential.

Why They Stay reveals the inner lives of eight political wives as they fight to maintain a grip on power and pursue personal ambition:

These political wives aren't powerless pawns. They are shrewder than you might expect. Why They Stay pulls back the curtain to reveal why women throughout history stand by their men for better and for worse.

"Anne Michaud breathes life into headlines that I thought I knew so well with fresh details about well-known political spouses like Hillary Clinton, Silda Wall Spitzer and Huma Abedin. Her thorough reporting helped cast them into an entirely new light and see how their personal struggles reflect the internal struggles women have faced for centuries." - Christine Haughney, NBC News managing editor

"No one could have written this book better than Anne Michaud, a columnist who has covered politicians for decades. Her observations are sharp and compelling and her prose shines with her unique signature for phraseology, crispness, and excellent diction. Why They Stay is a very informative, engaging, and entertaining work." - Christian Sia for Readers' Favorite