Media 2.0(17): An Insider's Guide to Today's World of Digital Media & Where It's Going (Hardcover) 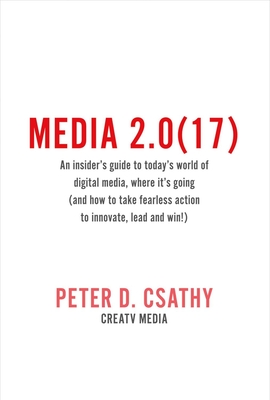 Media 2.0(17): An Insider's Guide to Today's World of Digital Media & Where It's Going (Hardcover)


This title is likely unavailable. Email or call for price and availability.
Media 2.0(17) takes you on a journey of how technology has transformed the world of content (Media 2.0), and gives a detailed snapshot of today's digital media world — including Internet-driven over-the-top (OTT) video, music, virtual reality (VR), augmented reality (AR), and eSports. Digital media expert Peter Csathy identifies today's digital media leaders, identifies their strengths and risks, and names his "Fearless Five" companies that made the boldest moves in 2016. Csathy also lays out a detailed roadmap of where the digital media world is going in 2017 and beyond via his renown "Top 10" predictions — and identifies concrete strategies and actions to immediately leverage the power of Media 2.0. Throughout, Csathy sprinkles in insights from key leaders in the digital media space via exclusive interviews (CEO Mike Hopkins of Hulu, CEO George Strompolos of Fullscreen, and many others), as well as his trademark humor to make it all entertaining and engaging.
Peter Csathy is founder & chairman of digital media accelerator CREATV Media – an advisory, consulting and business development firm. Peter is a business innovator -- an advisor, connector, entrepreneur, executive and dealmaker who has worked across the worlds of media and technology and has been on the forefront of several digitally-driven revolutions, including streaming video, music, and communications. Peter led digital media companies that achieved successful exits (SightSpeed, Musicmatch), worked as a leading dealmaker at the studios (Universal Studios, New Line Cinema), and invested as a venture capitalist (Manatt Venture Fund). He has negotiated deals in excess of $3 billion.Peter is a noted thought leader and "go to" industry resource for The Wall Street Journal, Variety, The Hollywood Reporter, TechCrunch, Los Angeles Times, The New York Times, Digiday, Billboard, CNBC, Bloomberg, BBC, Financial Times, among others. He frequently speaks at major industry events and is a regular contributor to leading industry publications TechCrunch and Variety in addition to his own Digital Media Update blog that USA Today's Jefferson Graham calls a "must read."