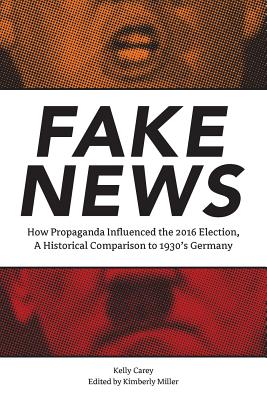 Fake News: How Propaganda Influenced the 2016 Election, A Historical Comparison to 1930's Germany is a brief comparison of propaganda tactics from Hitler's Third Reich to the right wing news machine that drove information in the 2016 election. Kelly Carey's expert comparison includes broken political parties, power vacuums and decades of false news, leading to unlikely and dangerous leaders in Adolf Hitler and Donald Trump. The reader will be introduced to the history and methods of Nazi propaganda and the mind of Josef Goebbels, the propaganda minister. Carey explains the similar tactics used by Steven Bannon and right wing media corporations for two decades and how they have mimicked Hitler's fake news machine. The uniformity is shocking and telling. The direct quotes by both leaders and their emotional inadequacies are alarming at best and guide the reader through the tangle of facts and fiction, as directed and disseminated by each leader. Carey explores why propaganda works to fool people into believing harmful agendas. The lies of the right have catapulted America to the brink of history in the same manner propaganda allowed the Third Reich to rise and change the world forever.