Beauford Delaney and James Baldwin: Through the Unusual Door (Paperback) 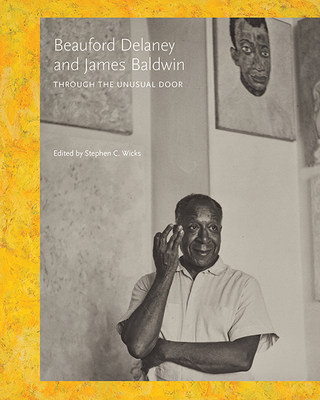 Beauford Delaney and James Baldwin: Through the Unusual Door (Paperback)


This title is likely unavailable. Email or call for price and availability.
Beauford Delaney and James Baldwin: Through the Unusual Door examines the thirty-eight-year relationship between painter Beauford Delaney (born in Knoxville, 1901; died in Paris, 1979) and writer James Baldwin (born in New York, 1924; died in Saint-Paul-de-Vence, France, 1987) and the ways their ongoing intellectual exchange shaped each other’s creative output and worldview. This full-color publication documents the groundbreaking exhibition organized by the Knoxville Museum of Art (KMA) and is drawn from the KMA’s extensive Delaney holdings, from public and private collections around the country, and from unpublished photographs and papers held by the Knoxville-based estate of Beauford Delaney. This book seeks to identify and disentangle the skein of influences that grew over and around a complex, lifelong relationship with a selection of Delaney’s works that reflects the powerful presence of Baldwin in Delaney’s life. While no other figure in Beauford Delaney’s extensive social orbit approaches James Baldwin in the extent and duration of influence, none of the major exhibitions of Delaney’s work has explored in any depth the creative exchange between the two.
The volume also includes essays by Mary Campbell, whose research currently focuses on James Baldwin and Beauford Delaney within the context of the civil rights movement; Glenn Ligon, an internationally acclaimed New York-based artist with intimate knowledge of Baldwin’s writings, Delaney’s art, and American history and society; Levi Prombaum, a curatorial assistant at the Solomon R. Guggenheim Museum who did his doctoral research at University College London on Delaney’s portraits of James Baldwin; and Stephen Wicks, the Knoxville Museum of Art’s Barbara W. and Bernard E. Bernstein Curator, who has guided the KMA’s curatorial department for over 25 years and was instrumental in building the world’s largest and most comprehensive public collection of Beauford Delaney’s art at the KMA.

Stephen C. Wicks is the Barbara W. and Bernard E. Bernstein Curator at the Knoxville Museum of Art. He served as curator of collections and exhibitions at the Columbus Museum (Georgia) between 2003 and 2006, but has overseen KMA's collections for nearly 20 years. He holds a Master’s Degree in Art History and Museum Studies from Case Western Reserve University. During his curatorial career, he has organized dozens of exhibitions devoted to contemporary art, including Forest of Visions (1993), Awakening the Spirits: Art by Bessie Harvey (1998), Richard Jolley: Sculptor of Glass (2000) and New Directions in American Drawing (2006).