The Influencer Effect: Insider Tips for Gearing Up Your Online Success (Hardcover) 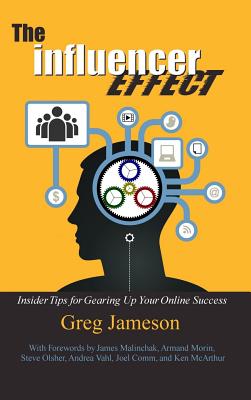 The Influencer Effect: Insider Tips for Gearing Up Your Online Success (Hardcover)

Being endorsed by Oprah is so powerful that it became known as the Oprah effect. Using this concept, late-night television host Stephen Colbert began attacking Amazon for discouraging customers from buying titles from his publisher, Hachette Book Group in July of 2014. But Mr. Colbert picked another Hachette author -- a startled and unknown author named Edan Lepucki -- as the focal point of his campaign against Amazon. He challenged viewers to buy enough copies to get the novel on the New York Times best-seller list. He also recommended "California" to his 6.6 million Twitter followers. The book became one of the most preordered debut titles in Hachette history and did in fact become a New York Times best-seller.

This story shows what can happen when someone else endorses and promotes your products and services. In his book, Greg Jameson calls this "The Influencer Effect". Of course, the product must deliver - California lived up to its promise. But getting an endorsement from someone who is respected and has a large following can produce huge results. Companies know this and are often willing to pay celebrities large sums of money as a result.

How can the average business owner, who doesn't have the budget for a celebrity endorsement, create this type of success for their company? There is a replicable process called GEARS, that Jameson describes in his book. As it turns out, celebrities are not always the best type of influencer. Lesser-known experts can often have a bigger impact on their following, much like a referral from a close friend or family member. These people are known as micro-influencers and your business will improve by working with them.

Whether you are a company or a leader looking to have others generate content and share it with your followers, or you are an expert who is sharing knowledge for something you are passionate about, influencer marketing is here to stay.

Using both personal stories and those of his clients, this book provides real-world examples on how you can grow your influence. Jameson practices what he preaches by borrowing the influence of others by featuring them at the beginning of each section. The GEARS acronym is used to explain the process in a clear an easy to remember system that anyone can apply. The parts of this gear system are as follows:

The center gear is called a "sun" gear. Everything revolves around the sun gear, which includes strategy and execution. The three gears that circle the sun gear are the "planet gears". These gears, "G, E, and A" comprise the primary methods used to develop a following, and how to market your online business. They stand for "Generate interest", "Empower influencers", and "Amplify your message".

The outer gear is called a "ring gear". This gear encircles all the other gears. This is discussed in the section on "Results", which is divided into three chapters: Revenues, Review & Repeat, and Research.
To recap, GEARS stands for:

Influence is simply about getting others to take a desired action. Jameson encourages the reader to not be selective with the methods he describes by following the GEARS system, but to use them all. When you do, the results can be massive.