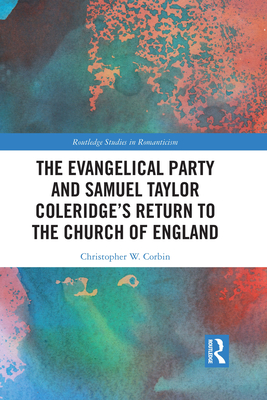 It has long been accepted that when Samuel Taylor Coleridge rejected the Unitarianism of his youth and returned to the Church of England, he did so while accepting a general Christian orthodoxy. Christopher Corbin clarifies Coleridge's religious identity and argues that while Coleridge's Christian orthodoxy may have been sui generis, it was closely aligned with moderate Anglican Evangelicalism. Approaching religious identity as a kind of culture that includes distinct forms of language and networks of affiliation in addition to beliefs and practices, this book looks for the distinguishable movements present in Coleridge's Britain to more precisely locate his religious identity than can be done by appeals to traditional denominational divisions. Coleridge's search for unity led him to desire and synthesize the warmth of heart religion (symbolized as Methodism) with the light of rationalism (symbolized as Socinianism), and the evangelicalism in the Church of England, being the most chastened of the movement, offered a fitting place from which this union of warmth and light could emerge. His religious identity not only included many of the defining Anglican Evangelical beliefs, such as an emphasis on original sin and the New Birth, but he also shared common polemical opponents, appropriated evangelical literary genres, developed a spirituality centered on the common evangelical emphases of prayer and introspection, and joined Evangelicals in rejecting baptismal regeneration. When placed in a chronological context, Coleridge's form of Christian orthodoxy developed in conversation with Anglican Evangelicals; moreover, this relationship with Anglican Evangelicalism likely helped facilitate his return to the Church of England. Corbin not only demonstrates the similarities between Coleridge's relationship to a form of evangelicalism with which most people have little familiarity, but also offers greater insight into the complexities and tensions of religious identity in late eighteenth and early nineteenth century Britain as a whole.

Christopher W. Corbin is Missioner for Transition and Leadership Ministries for the Episcopal Diocese of South Dakota and oversees Niobrara School for Ministry, the Diocese's program for continuing education and local ministerial formation.