Wilsonian Approaches to American Conflicts: From the War of 1812 to the First Gulf War (Paperback) 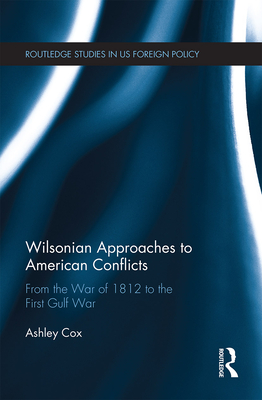 Wilsonian Approaches to American Conflicts: From the War of 1812 to the First Gulf War (Paperback)

This book explores US foreign policy, specifically the history of America's entry into the War of 1812, the First World War, the Korean War and the First Gulf War. Using a historical case study approach, it demonstrates how the Wilsonian Framework can give us a unique understanding of why the United States chose to go to war in those four conflicts.

Cox argues that the Wilsonian Framework is an important concern for decision makers in the US and that democracy promotion and the concept of international law are driving factors in each of these decisions to go to war. The realist and economic explanations of these conflicts are not sufficient and we must draw on Wilsonianism to gain a clear understanding of these conflicts. Drawing on the history of American liberalism and the work of Walter Russel Mead and Tony Smith, the book presents a definition of Wilsonianism that represents a broad span of the history of The Republic, in order to show consistency across time. It also establishes why the realist and economic explanations fail to provide sufficient explanatory power and how the Wilsonian Framework can give important insights into these conflicts.

This book will be of interest to international historians and international relations scholars at both postgraduate and scholar level. It will also be of use to those wishing to conduct future research into the motivations that drive the foreign and security policies of the United States.

Ashley Cox is a Lecturer in Diplomacy and Public Policy in the Centre for International Studies and Diplomacy at SOAS, University of London. His research interests focus on US diplomacy, foreign and defence policy both contemporary and historical. He is a member of BISA, the US Foreign Policy Working Group, the Learning and Teaching Working Group, the Society for Historians of American Foreign Relations, and the British Association for American Studies.