This Happened Here: Amerikaners, Neoliberals, and the Trumping of America (Paperback) 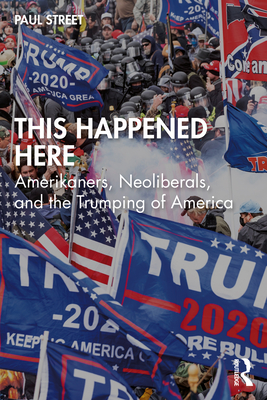 This Happened Here: Amerikaners, Neoliberals, and the Trumping of America (Paperback)

This book examines the Trump phenomenon and presidency as fascist. Fascism here connotes not generically bad politics or a consolidated political-economic regime (Mussolini's Italy or Hitler's Germany) but a set of political, movement, and ideological traits understood within the context of the neoliberal-capitalist era. While Trump's election defeat is a respite, the nation is far from out of the neofascist woods. Defeating the menace will require political and societal restructuring far beyond what is imagined by Democrats. This argument is developed across seven chapters that recount Trump's assault on the 2020 election, specifically define the meaning of fascism as it is used in this book, demonstrate the neofascist nature of the Trump presidency, engage intellectual class Trumpism-fascism-denial, analyze the Trump base, root Trumpism in a longstanding and indeed founding American white nationalism, examine why Trump rose to power when he did, and suggest paths for fascism-proofing the USA.

Paul Street is an independent progressive policy researcher, award-winning journalist, historian, and speaker. He is the author of nine books, most recently Hollow Resistance: Obama, Trump, and the Politics of Appeasement. Street writes regularly for Counterpunch.