Nato's Democratic Retrenchment: Hegemony After the Return of History (Paperback) 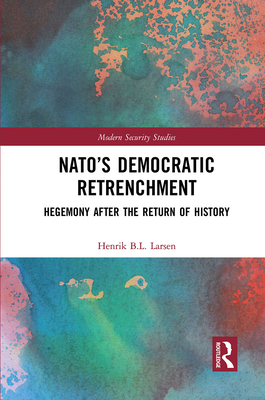 Nato's Democratic Retrenchment: Hegemony After the Return of History (Paperback)

By Henrik B. L. Larsen

Exploring NATO's post-Cold War determination to support democracy abroad, this book addresses the alliance's adaptation to the new illiberal backlashes in Eastern Europe, the Western Balkans and Afghanistan after the alleged 'return of history'.

The book engages the question of what has driven NATO to pursue democratisation in face of the significant region-specific challenges and what can explain policy expansion or retrenchment over time. Explaining NATO's adaptation from the perspective of power dynamics that push for international change and historical experience that informs grand strategy allows wider inferences not only about democratisation as a foreign policy strategy but also about the nature of the transatlantic alliance and its relations with a mostly illiberal environment. Larsen offers a theoretical conception of NATO as a patchwork of one hegemonic and several great power interests that converge or diverge in the formulation of common policy, as opposed to NATO as a community of universal values.

This volume will appeal to researchers of transatlantic relations, NATO's functional and geographical expansion, hegemony and great power politics, democracy promotion, lessons of the past, (Neoclassical) Realism, alliance theory, and the crisis of the liberal world order.