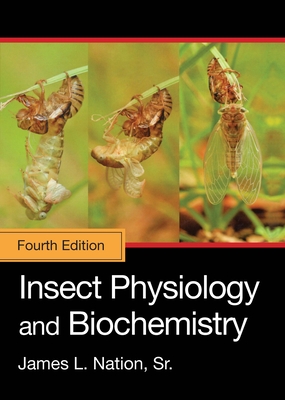 Employing the clear, student-friendly style that made previous editions so popular, Insect Physiology and Biochemistry, Fourth Edition presents an engaging and authoritative guide to the latest findings in the dynamic field of insect physiology. The book supplies a comprehensive picture of the current state of the function, development, and reproduction of insects. Expanded and updated, now in full colour, this fourth edition adds three new chapters on the role of the nervous system in behavior; the 'Genomics Revolution' in entomology; and global climate changes which have a major effect on insects, including warming and weather. It continues to challenge conventional entomological wisdom with the latest research and analytical interpretations.

The text will appeal to upper undergraduate and graduate students and to practicing biologists who need to possess a firm knowledge of the broad principles of insect physiology. With detailed full colour illustrations to help explain physiological concepts and important anatomical details, it remains the most easily accessible guide to key concepts in the field.

James L. Nation is currently Professor Emeritus in the Entomology & Nematology Department, College of Agriculture and Life Sciences, University of Florida, Gainesville, FL. He taught graduate courses in the Department of Entomology & Nematology, conducted research, and taught Global Environmental Issues in the Honors Program before retiring in June 2003 after 43 years teaching and research at the University of Florida. He continued to teach, on a contract basis, in the undergraduate Honor Program at University of Florida (Global Environmental Issues, 3 credit course, and Origin of Humans, 1 credit course) until 2020 when he retired from teaching. He holds a BS degree (1957) from Mississippi State University (Entomology with Chemistry minor) and a PhD (1960) from Cornell University (Entomology with specialization in insect physiology and insect biochemistry). He was voted Teacher of the Year by the graduate students in the Entomology & Nematology Dept. at University of Florida in 1989-90, 1994-95, 1996-97, 1998-99, and 2000-2001. In 2001 he received the Distinguished Faculty Award from Florida Blue Key Fraternity for outstanding service to the University of Florida. In 2006 he received an award from the Florida Entomological Society in recognition of Achievement for Teaching in Higher Education. He introduced a graduate course in Insect Physiology for entomology students at Florida A & M University, Tallahassee, FL in the fall term, 2006. The course was taught principally by interactive TV from Gainesville, with a few visits to the A&M campus. At the annual HONORS BANQUET on April 15, 2010, he was selected as the 2010/2011 Honors Professor of the Year at the University of Florida. He edited (with two others) the international Journal of Chemical Ecology from 1995-2000, and the Florida Entomologist, An International Journal for the Americas from 2004-2010. In 2011 he received an award from the Florida Entomological Society in recognition of Editorial Services to the Society for editing the Florida Entomologist. He has authored or co-authored more than 85 scientific publications in refereed journals, and short articles in the Encyclopedia of Entomology (John Capinera, Editor). He is the author of Insect Physiology and Biochemistry (CRC Press), a textbook for graduate and undergraduate studies. The first edition was published in 2002, a revised 2nd edition of the book was published in April 2008, and a 3rd revised edition was published in August 2015. The 4th revision is soon to be published. His e-mail address is JLN@ufl.edu