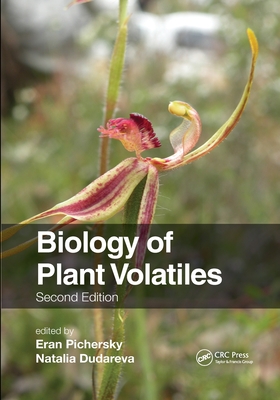 Plant volatiles--compounds emitted from plant organs to interact with the surrounding environment--play essential roles in attracting pollinators and defending against herbivores and pathogenes, plant-plant signaling, and abiotic stress responses. Biology of Plant Volatiles, with contributions from leading international groups of distinguished scientists in the field, explores the major aspects of plant scent biology.

Responding to new developments in the detection of the complex compound structures of volatiles, this book details the composition and biosynthesis of plant volatiles and their mode of emission. It explains the function and significance of volatiles for plants as well as insects and microbes whose interactions with plants are affected by these compounds. The content also explores the biotechnological and commercial potential for the manipulation of plant volatiles.

This book will be a touchstone for future research on the many applications of plant volatiles and is aimed at plant biologists, entomologists, evolutionary biologists and researchers in the horticulture and perfume industries.

Eran Pichersky is the Michael M. Martin Collegiate Professor in the Department of Molecular, Cellular, and Developmental Biology (MCDB) at the University of Michigan. He received his B.Sc. degree from the University of California, Berkeley in 1980, and a Ph.D. from the University of California, Davis in 1984. After doing research as a post-doctoral fellow at the Rockefeller University in New York, he has been on the faculty of the University of Michigan since 1986, serving as the first Chair of the newly created MCDB Department from 2001-2003. His awards include a Fulbright fellowship and an Alexander von Humboldt fellowship, both received in 2000, and a Guggenheim fellowship in 2015. He was elected a Fellow by the American Association for the Advancement of Science (AAAS) in 2012 and by the American Society of Plant Biologists in 2017. Dr. Pichersky has served on the editorial boards of several major scientific journals that cover plant research, and had previously edited (together with Dr. Natalia Dudareva) a book on the Biology of Floral Scent published by CRC Press.Dr. Pichersky's research has concentrated on identifying the myriad compounds that are found uniquely in plants, many of which are extensively used by people, with emphasis on those that impart scent and flavor. His group further elucidates how plants synthesize these compounds, and how this information can be used to enhance the production by plants of such valuable chemicals. Over the years Dr. Pichersky's research group has collaborated with many other research groups around the world, and Dr. Pichersky himself has spent extensive time as a visiting scholar doing research at scientific institutes around the world, including the United States, Germany, Israel and Australia. Dr. Pichersky has authored more than 250 reports, reviews, letters and editorials in scientific publications, and is a recipient of several patents.Natalia Dudareva is a Distinguished Professor in the Department of Biochemistry at Purdue University. She received her M.S. in biology and biochemistry from Novosibirsk State University, Russia and her PhD at the Institute of Biochemistry, Kiev, Ukraine and the University of Louis Pasteur, Strasbourg, France. After a postdoctoral training at the University of Michigan, Dr. Dudareva joined the Department of Horticulture and Landscape Architecture, Purdue University in 1997 and received a distinguished professorship in 2010. She joined the Department of Biochemistry in 2013. Research in the Dudareva laboratory focuses on understanding of biochemical and molecular mechanisms controlling the formation of primary and secondary (phenylpropanoid and terpenoid) metabolites in plants using the power of genetic and biochemical approaches combined with metabolic flux analysis and modeling. With initial focus on plant volatiles, her group not only identified many genes involved in the final steps of their biosynthesis but also discovered the primary metabolic networks that supply precursors for volatile formation. Her group also showed that active biological mechanisms are involved in transporting volatile compounds from plant cells to the atmosphere.Dudareva has published 120 papers, 25 book chapters and 2 books, and has given more than 200 invited lectures at conferences and other universities. She has received recognition for her research as Purdue University Faculty Scholar and the Wickersham Chair of Excellence in Agricultural Research. She has been awarded the Purdue University Agricultural Research Award, Sigma Xi Faculty Research Award, the Alexander von Humboldt Research Award (Germany) and 2018 Herbert Newby McCoy Award, Purdue's most prestigious award given for outstanding work in the natural sciences. In 2010 she was elected a Fellow of the American Association for the Advancement of Science.