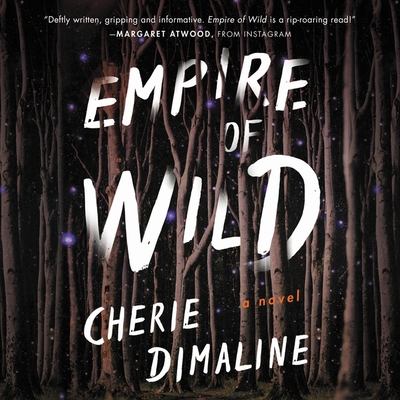 By Cherie Dimaline, Michelle St John (Read by)
Email or call for price & availability
Not Currently Available to Order

“Cherie Dimaline’s latest novel packs a wallop of a story. Absolutely stunning in every way, this latest offering follows the story of Joan, whose husband has disappeared, and her courage when confronted with truths and lies. She and her husband, Victor, live in a Métis community, close and tight knit. As Joan deals with the fallout of her emotions after Victor disappears, she comes across another man, Eugene Wolff, who bears her husband’s face. He does not carry Victor’s memories and insists he has no idea who Joan’s husband is. Turning over rocks to find the truth, Joan reaches out to whomever she can in her community for help. What waits for her at the end of her quest is incredible. This novel will have you at the edge of your seat!”
— Annie Carl, The Neverending Bookshop, Edmonds, WA

"Deftly written, gripping and informative. Empire of Wild is a rip-roaring read "--Margaret Atwood, From Instagram

"Empire of Wild is doing everything I love in a contemporary novel and more. It is tough, funny, beautiful, honest and propulsive--all the while telling a story that needs to be told by a person who needs to be telling it."--Tommy Orange, author of There There

A bold and brilliant new indigenous voice in contemporary literature makes her American debut with this kinetic, imaginative, and sensuous fable inspired by the traditional Canadian M tis legend of the Rogarou--a werewolf-like creature that haunts the roads and woods of native people's communities.

Joan has been searching for her missing husband, Victor, for nearly a year--ever since that terrible night they'd had their first serious argument hours before he mysteriously vanished. Her M tis family has lived in their tightly knit rural community for generations, but no one keeps the old ways . . . until they have to. That moment has arrived for Joan.

One morning, grieving and severely hungover, Joan hears a shocking sound coming from inside a revival tent in a gritty Walmart parking lot. It is the unmistakable voice of Victor. Drawn inside, she sees him. He has the same face, the same eyes, the same hands, though his hair is much shorter and he's wearing a suit. But he doesn't seem to recognize Joan at all. He insists his name is Eugene Wolff, and that he is a reverend whose mission is to spread the word of Jesus and grow His flock. Yet Joan suspects there is something dark and terrifying within this charismatic preacher who professes to be a man of God . . . something old and very dangerous.

Joan turns to Ajean, an elderly foul-mouthed card shark who is one of the few among her community steeped in the traditions of her people and knowledgeable about their ancient enemies. With the help of the old M tis and her peculiar Johnny-Cash-loving, twelve-year-old nephew Zeus, Joan must find a way to uncover the truth and remind Reverend Wolff who he really is . . . if he really is. Her life, and those of everyone she loves, depends upon it.