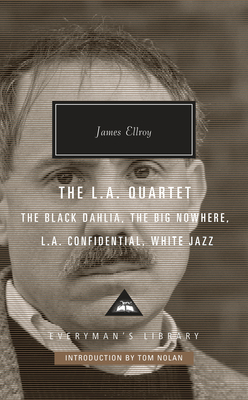 
Available in Warehouse. Wait for Email Confirmation for ETA
Here in one volume is James Ellroy's first great body of work, an epic re-envisioning of postwar Los Angeles--etched in red and black and film-noir grays.

The Black Dahlia depicts the secret infrastructure of L.A.'s most sensational murder case. A young cop morphs into obsessed lover and lust-crazed avenger. The Dahlia claims him. She is the deus ex machina of a boomtown in extremis. The cop's rogue investigation is a one-way ticket to hell.

The Big Nowhere blends the crime novel and the political novel. It is winter, 1950--and the L.A. County Grand Jury is out to slam movieland Reds. It's a reverential shuck--and the three cops assigned to the job are out to grab all the glory they can. A series of brutal sex killings intervenes, and the job goes all-the-way bad.

L.A. Confidential is the great novel of Los Angeles in the 1950s. Political corruption. Scandal-rag journalism. Bad racial juju and gangland wars. Six local stiffs slaughtered in an all-night hash house. The glorious and overreaching LAPD on an unprecedented scale.

White Jazz gives us the tortured confession of a corrupt cop going down for the count. He's a slumlord, a killer, a parasitic exploiter. He's a pawn in a series of police power plays and starting to see that he's being had. He's just met a woman. Thus, he's determined to claw his way out of the horrifying world he's created--and he's determined to tell us everything.

The L.A. Quartet is a groundbreaking work of American popular fiction.
JAMES ELLROY was born in Los Angeles in 1948. He is the author of the Underworld U.S.A. Trilogy--American Tabloid, The Cold Six Thousand, and Blood's A Rover--and the L.A. Quartet novels, The Black Dahlia, The Big Nowhere, L. A. Confidential, and White Jazz. He lives in Colorado.