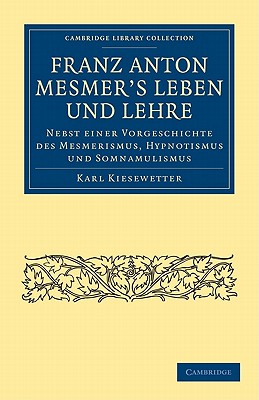 
Available in Warehouse. Wait for Email Confirmation for ETA
This book cannot be returned, cancelled, or exchanged. Please call for availability and pricing
Karl Kiesewetter (1854-1895) was the most influential German theosophical writer of his time, and wrote several books on the history of esotericism and occultism. This biography of Mesmer (1734-1815) was first published in Leipzig in 1893. It begins with two very substantial historical chapters. The first discusses practitioners of 'animal magnetism' before Mesmer, citing evidence dating back to ancient Egyptian hieroglyphs and Babylonian cuneiform records. The second discusses the history of visions, dreams, trances, soothsaying and divination, referring to the Greeks and the Gnostics. The second half of the book focuses on Mesmer himself. It describes his childhood near Lake Constance, his university education in philosophy and medicine, his medical practice in Vienna and his interest in 'cosmic magnetism'. It documents his treatments and the controversies they caused, his travels, his benefactors and detractors, and ends with a summary of his theories including extracts from his work.