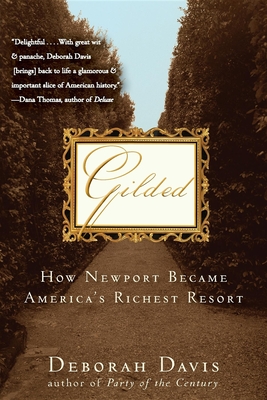 
Available in Warehouse. Wait for Email Confirmation for ETA
A beautifully written history of high society in Newport, Rhode Island, from the acclaimed author of Party of the Century

Newport is the legendary and beautiful home of American aristocracy and the sheltered super-rich. Many of the country's most famous blueblood families?the closest thing we have to royalty?have lived and summered in Newport since the nineteenth century. The Astors, the Vanderbilts, Edith Wharton, JFK and Jacqueline Kennedy Onassis, Doris Duke, and Claus and Sunny von Bulow are just a few of the many names who have called the city home. Gilded takes you along as you explore the fascinating heritage of the Newport elite, from its first colonists to the newest of its new millennium millionaires, showing the evolution of a town intent on living in its own world. Through a narrative filled with engrossing characters and lively tales of untold extravagance, Davis brings the resort to life and uncovers the difference between rich and Newport rich along the way.

Written with insight and dramatic flair, Gilded gives you a rare peek into the cloistered coastal playground of America's moneyed elite.

Deborah Davis is the author of the acclaimed "Party of the Century: The Fabulous Story of Truman Capote and His Black and White Ball" and "Strapless: John Singer Sargent and the Fall of Madame X." She is a film executive who has worked as a story editor and a story analyst for several major film companies.