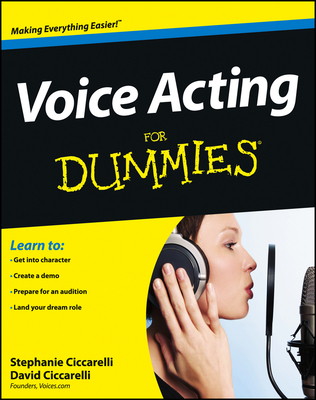 
Available in Warehouse. Wait for Email Confirmation for ETA
This book cannot be returned, cancelled, or exchanged. Please call for availability and pricing
Make a career out of your voice? Easy.

Voice acting is like acting, but just using your voice It's a unique career where the actor's voice can be heard worldwide-in commercials, on audiobooks, in animated movies, documentaries, online videos, telephone systems and much, much more. The point is to bring the written word to life with the human voice.

With step-by-step explanations and an abundance of examples, Voice Acting For Dummies is the ultimate reference for budding voice actors on auditioning, recording, producing voice-overs, and promoting themselves as a voice actor.

If you're an aspiring voice actor or an actor or singer considering a career transition, Voice Acting For Dummies has everything you need to let your voice talents soar.

Stephanie Ciccarelli and David Ciccarelli are the founders of Voices.com, the largest global web hub for voice actors. For approximately the past eight years, Stephanie, David, and their team have grown Voices.com from the ground up to become the leader in the industry.