Healing the Heart of Democracy: The Courage to Create a Politics Worthy of the Human Spirit (Paperback) 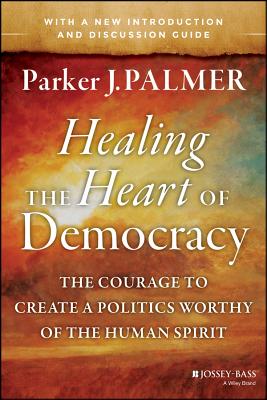 Healing the Heart of Democracy: The Courage to Create a Politics Worthy of the Human Spirit (Paperback)


Available in Warehouse. Wait for Email Confirmation for ETA
Hope for American democracy in an era of deep divisions

In Healing the Heart of Democracy, Parker J. Palmer quickens our instinct to seek the common good and gives us the tools to do it. This timely, courageous and practical work--intensely personal as well as political--is not about them, those people in Washington D.C., or in our state capitals, on whom we blame our political problems. It's about us, We the People, and what we can do in everyday settings like families, neighborhoods, classrooms, congregations and workplaces to resist divide-and-conquer politics and restore a government of the people, by the people, for the people.

In the same compelling, inspiring prose that has made him a bestselling author, Palmer explores five habits of the heart that can help us restore democracy's foundations as we nurture them in ourselves and each other:

Healing the Heart of Democracy is an eloquent and empowering call for We the People to reclaim our democracy. The online journal Democracy & Education called it one of the most important books of the early 21st Century. And Publishers Weekly, in a Starred Review, said This beautifully written book deserves a wide audience that will benefit from discussing it.

PARKER J. PALMER, whose books have sold over a million copies, holds a Ph.D. in sociology from the University of California at Berkeley and eleven honorary doctorates. In 2011, the Utne Reader named him one of twenty-five "People Who Are Changing Your World." He is Founder and Senior Partner of the Center for Courage & Renewal.