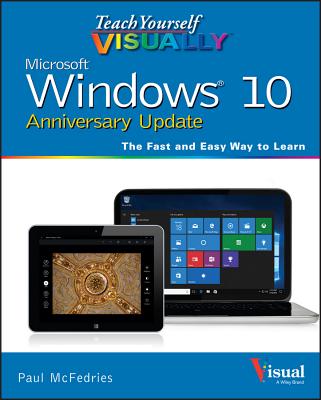 Teach Yourself VISUALLY Windows 10 Anniversary Update is the quick and easy way to get up and running with Windows 10 and Windows 10 Update. From setting up to shutting down and everything in between, this book guides you through everything you need to know to start working with Windows 10. Learn how to customize Widows 10, pin an app to the Start menu, work with files and digital media, customize the interface, optimize performance, set up email, go online, and so much more. Two-page spreads, detailed instruction, and expert content walk you through more than 150 Windows tasks. Coverage includes the Windows 10 release, along with the newest features of the Windows 10 Anniversary Update.

This is your visual guide to learning what you can do with Windows 10 and Windows 10 Anniversary Update.

Paul McFedries (Toronto, Ontario) is the president of Logophilia Limited, a technical writing company. He has been programming since he was a teenager in the mid-1970s, has programmed everything from mainframes to desktops to bar code scanners, and has worked with many different languages, including Fortran, assembly language, C++, and, of course, JavaScript. Paul has written more than four dozen books that have sold more than two million copies worldwide. These books include Windows 8 Visual Quick Tips, Teach Yourself VISUALLY Macs, 2nd Edition, Macs Portable Genius, and Teach Yourself VISUALLY Windows 10. Paul encourages all readers to drop by his Web site, mcfedries.com.