Urdu Literary Culture: Vernacular Modernity in the Writing of Muhammad Hasan Askari (Literatures and Cultures of the Islamic World) (Hardcover) 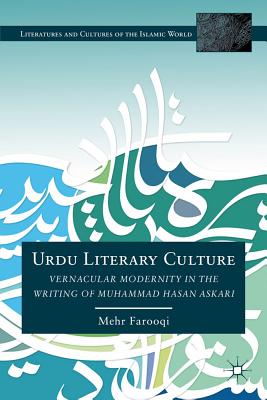 Urdu Literary Culture: Vernacular Modernity in the Writing of Muhammad Hasan Askari (Literatures and Cultures of the Islamic World) (Hardcover)


Available in Warehouse. Wait for Email Confirmation for ETA
Urdu Literary Culture examines the impact of political circumstances on vernacular (Urdu) literary culture through an in-depth study of the writings of Muhammad Hasan Askari, who lived during the Partition of India.
Mehr Afshan Farooqi is an assistant professor of South Asian Literature at the University of Virginia, USA.

'The strikingly original literary theorist Muhammad Hasan Askari, who began as an avant-garde Europhile and ended as a strictly Islamic Sufi, occupies a particularly contentious place in Urdu literary culture, and remains almost entirely unknown outside it. Farooqi sets out to 'enter into Askari's complicated life' so that she can 'better understand his sensibility.' In this project she succeeds excellently. Her thoughtful work is full of new information about Askari and his literary and political worlds, and also suggests some fruitful directions for further study. It deserves to be on the bookshelf of anyone who is interested in Urdu literary history or the postcolonial intellectual history of South Asia.' - Frances W. Pritchett, Professor of Modern Indic Languages, Columbia University

'Farooqi thoughtfully examines the life and work of Muhammad Hasan Askari, arguably the foremost critic in the world of mid-twentieth century Urdu letters. Farooqi shares with us her excitement for this world, which included movements of aesthetic innovation, leftist literary progressivism, and renewed Islamic identity. She shows us how Askari achieved insights into all these movements, but from his own perspective—one grounded in the classical Urdu literary heritage but informed both by Western literary critical thought. Farooqi gives us some nice close readings of the daring short stories that brought Askari early acclaim but focuses on his later, much more voluminous, work as an essayist, adroitly summarizing key texts of this untranslated corpus and presenting exemplary passages in English. She also deals sensitively with his personal life, including questions about the nature of his affection for two other literary figures of the day. Engagingly written and perceptive, Urdu Literary Culture will be welcome by all readers interested in modern South Asian literature.' - Daniel Gold, Professor, South Asian Religions, Department of Asian Studies, Cornell University

'Farooqi is a literary historian and a raconteur. Her subject, Muhammad Hasan Askari, is an unfamiliar figure outside the world of Urdu letters, but in her vivid account we meet him and we see a portrait of a generation.' - Michael Beard, Chester Fritz Distinguished Professor of English, University of North Dakota