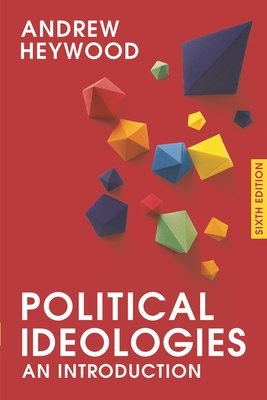 The 6th edition of Andrew Heywood's best-selling undergraduate textbook provides a clear and accessible introduction to the political creeds and doctrines that have dominated and shaped politics around the world. The author offers a clear exposition both of the historical development of each ideology and of the impact it has had on contemporary political behaviour, movements, parties and governments. In recent years, political commentators have heralded a renaissance of popular political ideology, characterised by a resurgence of issues and political traditions that many had thought obsolete. This new edition is updated throughout to take account of these developments, broadening its appeal internationally.

The book is particularly relevant for first and second year undergraduate teaching, and can be used to structure a whole course on political ideologies covering traditional ideologies (conservatism, socialism, liberalism, anarchism and fascism) as well as concepts which have developed into concrete ideologies more recently (multiculturalism, feminism and ecologism, amongst others). New to this Edition:
- New introductory and concluding chapters, 'Why Political Ideology Matters' and 'Ideology Without End', that take stock of the revival of political ideology
- A new Chapter on 'Islamism and Religious Politics' affords greater attention to what is the most politically significant contemporary religious political ideology
- A reworked and refreshed chapter around 'Green Ideology'
- New illustrated feature on 'Political Ideologies in Action', linking a major historical event in to the ideology considered in each chapter, help to show the role different ideologies have played through global history