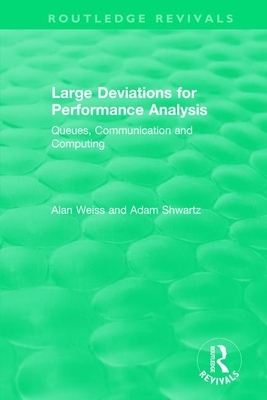 Originally published in 1995, Large Deviations for Performance Analysis consists of two synergistic parts. The first half develops the theory of large deviations from the beginning, through recent results on the theory for processes with boundaries, keeping to a very narrow path: continuous-time, discrete-state processes. By developing only what is needed for the applications, the theory is kept to a manageable level, both in terms of length and in terms of difficulty. Within its scope, the treatment is detailed, comprehensive and self-contained. As the book shows, there are sufficiently many interesting applications of jump Markov processes to warrant a special treatment. The second half is a collection of applications developed at Bell Laboratories. The applications cover large areas of the theory of communication networks: circuit switched transmission, packet transmission, multiple access channels, and the M/M/1 queue. Aspects of parallel computation are covered as well including, basics of job allocation, rollback-based parallel simulation, assorted priority queueing models that might be used in performance models of various computer architectures, and asymptotic coupling of processors. These applications are thoroughly analysed using the tools developed in the first half of the book.