From Puritanism to Postmodernism: A History of American Literature (Routledge Classics) (Paperback) 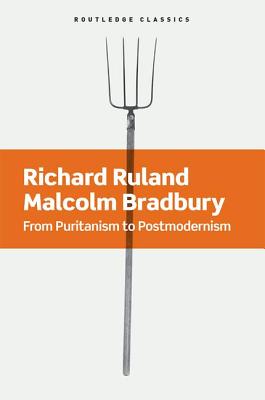 From Puritanism to Postmodernism: A History of American Literature (Routledge Classics) (Paperback)

Widely acknowledged as a contemporary classic that has introduced thousands of readers to American literature, From Puritanism to Postmodernism: A History of American Literature brilliantly charts the fascinating story of American literature from the Puritan legacy to the advent of postmodernism. From realism and romanticism to modernism and postmodernism it examines and reflects on the work of a rich panoply of writers, including Poe, Melville, Fitzgerald, Pound, Wallace Stevens, Gwendolyn Brooks and Thomas Pynchon. Characterised throughout by a vibrant and engaging style it is a superb introduction to American literature, placing it thoughtfully in its rich social, ideological and historical context.

A tour de force of both literary and historical writing, this Routledge Classics edition includes a new preface by co-author Richard Ruland, a new foreword by Linda Wagner-Martin and a fascinating interview with Richard Ruland, in which he reflects on the nature of American fiction and his collaboration with Malclolm Bradbury. It is published here for the first time.

Malcolm Bradbury (1932-2000) was Professor of Literature and American Studies first at the University of Birmingham (1961-65) and then at the University of East Anglia from 1970 until his retirement in 1995. Bradbury became a Commander of the British Empire in 1991 for services to literature and was made a Knight Bachelor in the New Year Honours 2000, again for services to literature. Richard Ruland is Professor Emeritus of English, American, and Comparative Literature at Washington University in St. Louis, Missouri, USA. After teaching in the English and American Studies programs at Yale University for several years, he has been a member of the English Department faculty at Washington University from 1967 until his recent retirement.